Suge Knight Said He Had Sex With Lisa Lopes While She Was With Andre Rison, ‘Left Eye’ Thought Tupac Was Her ‘Soulmate’ 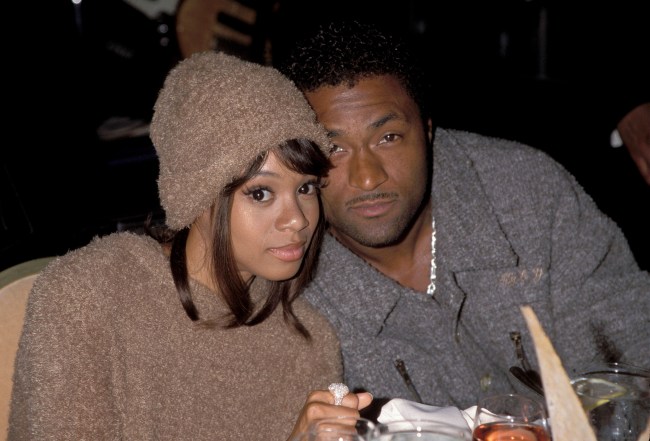 A new docuseries is exposing the secret love affair between Lisa “Left Eye” Lopes, Suge Knight, and Andre Rison, which also includes Tupac Shakur for good measure. Jump in your Delorean, it’s time to go back to the 1990s to explore an odd love triangle, that might be a love rectangle.

Lisa Lopes died on April 25, 2002, after suffering a fatal injury because of a car accident in La Ceiba, Honduras. Before the 30-year-old TLC singer died, she had been in a tumultuous celebrity relationship with NFL player Andre Rison. The romance between the singer and the Atlanta Falcons wide receiver spanned between 1993 and 2001, and was marred by accusations of domestic violence and alcoholism.

The relationship made headlines in 1994 when Lopes set fire to Rison’s sneakers and teddy bears in a bathtub because she found him in bed with another woman. The blaze got out of control and burned down Andre’s million-dollar mansion.

Andre claims that before he was caught cheating, he saw Lopes in the back of a limo with Tupac Shakur.

#AndreRison tells a story about #LeftEye telling him she had a car coming to pick her up from his house. And seeing #Tupac in the backseat of the car when it pulled up in his driveway. Andre Rison insinuates that after he seen Tupac in the backseat of the car that came and picked Left Eye up. That's what fueled him to bring a female over the house while Left Eye was gone. Which lead to Left Eye putting a bunch of teddy bears and clothes in a bath tub and setting them on fire. After she came home and seen Andre Rison with a female. By the way this is a fire that took place before the infamous fire that burned down Andre Rison mansion. #HopelesslyInLove

Lopes was a superstar when she was part of the iconic 90s R&B group TLC, along with Tionne “T-Boz” Watkins and Rozonda “Chilli” Thomas. But Lopes decided that she wanted to go solo, and signed with Suge Knight’s Death Row in January of 2002. Lopes put out her second solo album titled N.I.N.A. (New Identity Not Applicable) under Death Row Records.

Now, Suge Knight claims that he had sex with Lopes after she signed with Death Row. The new Lifetime documentary series titled Hopelessly in Love details a love affair between Suge and Left Eye.

Knight said he had “a sexual relationship” with Lopes, but added, “I had major love for her, I cared for her. But I knew [her fiance] Andre Rison, we were cool. But I cared about [Lisa.]”

“She went to one of my high rises one time. She gave me a hug, and I sat back down in my chair and fired up a cigar,” Suge said of Lopes. “The doorbell rings, so I get up and open up the door, and they got the carts – it’s all her [clothes and suitcases].”

“And she never went home, She showed up and never rolled out,” Suge claims. “We started hanging, and she’s a great person.”

The accusations are backed up by Rison; despite that he was the one Left Eye was cheating on. Rison confirmed that Lopes “had relations with Suge, and that’s just messy.” In September 2018, Marion “Suge” Knight pleaded no contest to voluntary manslaughter for running over and killing a Compton man and was sentenced to 28 years in prison.

If you haven't seen this @lifetimetv documentary #HopelesslyInLove about #AndreRison and #LeftEye relationship. Y'all need to check it out asap! This is a great documentary. Check out this clip, I had no idea about the Grammy incident with #Tupac, Andre Rison and Left Eye. Suge Knight also confirms his relationship with Left Eye as well. And Andre Rison talks about turning down marrying Left Eye because he still had questions about Tupac and Left Eye relationship.

The docuseries also alleges that Left Eye was obsessed with Tupac Shakur. Rison said that Lisa was in love with Tupac, and referred to the I Get Around rapper as her “soulmate.”

Tupac allegedly only wanted to be friends with Lopes, and reportedly told her: “Look, no matter whatever happens don’t ever let me f*ck you.”

“And so she decided that they will just be friends, although she had an interest in him, you know, after you said that it was like – okay cool,” said hip-hop producer Sky Keeton in an interview.

Left Eye later met rapper Treach from Naughty by Nature, who was also friends with 2pac. “Treach told Pac about him smashing, and you know, Pac got pissed off and called Lisa and cut out, and that was it,” according to Keeton. “She was hurt about it, cuz she loved Pac, you know, she loved him to death. She told me that she and Tupac are like twins.”

When Tupac Shakur died in 1996 following the drive-by shooting in Las Vegas, “Lisa was devastated,” according to the Lifetime docuseries. Lopes allegedly called off her upcoming wedding to Rison.

Andre said he “knew how Lisa felt about Pac.” He added that “Lisa would always deny that she slept with Pac, and I still didn’t believe it. I think she was confused because she loved me and she loved Tupac.”