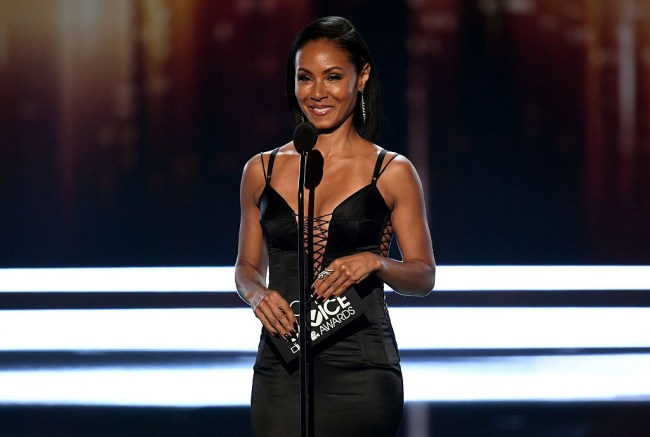 Jada Pinkett Smith had an intense relationship with Tupac Shakur before he was an iconic rapper. Decades after Tupac’s death, Jada still has powerful feelings about her intimate friend. Jada was reduced to tears while reminiscing about the life and death of Tupac Shakur on a recent episode of her Red Table Talk Facebook show.

On Monday, Whitney Houston’s close friend and confidante Robyn Crawford appeared on Red Table Talk with Jada. Crawford was promoting her new book A Song For You: My Life With Whitney Houston, which delivers a “deeply personal, heartfelt, and previously untold story that provides an understanding of the complex life of Whitney Houston. Finally, the person who knew her best sets the record straight.”

Coincidentally, there have been rumors that Tupac had an affair with Whitney Houston. In Bobby Brown’s 2017 memoir Every Little Step, the R&B singer alleges that his ex-wife cheated on him with Tupac.

“[Brown] contends that [Houston] did her ‘share of cheating’ with ‘quite a few of the producers and artists’ she worked with, and names one ex-lover, the late Tupac Shakur,” according to an Associated Press review of the book.

During the interview, Jada said she understood Crawford’s relationship with Whitney Houston because she had a “complex relationship” with Tupac Shakur.

“That I understood, because of the complex relationship I’ve had with Pac in those moments of his, ‘Who’s that?!,’ knowing damn well there ain’t nothing like that between us,” Jada said.

Pinkett Smith first met Tupac Shakur, real name Lesane Parish Crooks, at the Baltimore School for the Arts in Maryland in 1989. At the time, Jada was a drug dealer and called Tupac “funny looking.”

“It was the first day, and he came over to me and introduced himself,” Jada said in an earlier interview from the summer. “And in high school, Pac was a little funny looking. Definitely from looking at him, wasn’t necessarily the type of cat that I would even like, deal with.”

“He was one of my best friends,” Jada says of Shakur. “He was like a brother, it was beyond friendship for us as far as just, the type of relationship we had, you only get that once in a lifetime.”

“There’s not a day that goes by that I don’t think about Pac,” she added. “I think about him every single day.”

During the Red Table Talk Facebook show, she said Tupac told her: “You’re the only stability I got, I can’t afford for you to put that attention elsewhere. I need that stability.”

Attempting to fight off tears, Jada said, “So for him, it was… we were an anchor for each other. So any time he felt like that anchor was threatened… oh my god.”

“For him, it was, we were an anchor for each other,” she said of their intense relationship. “Anytime he felt like that anchor was threatened, oh my God.”

“He felt as though I had changed,” Jada explained on the disintegration of their relationship. “I’d gone Hollywood. I’d gone soft. And looking back now, I totally understand where Pac was at the time. It was a mentality he started to come out of before he was murdered.”

Jada wept as she said, “It’s hard to love someone who has a legacy.”

Though they were extremely close friends, Jada said that she never had sex with Shakur, but did kiss him. On an appearance on The Howard Stern Show years ago, Jada said she and Shakur lacked “physical chemistry.”

“You know, it’s so funny because now being older, I have more of an understanding of what that was between us,” Pinkett Smith told Howard Stern. “When you have two young people that have very strong feelings, but there was no physical chemistry between us at all, and it wasn’t even just for me — it was him too.”

“There was a time when I was like, ‘Just kiss me! Let’s just see how this goes,’ and when I tell you it had to be the most disgusting kiss for us both,” Jada explained. Jada said Tupac was like a “brother-father figure to me, very protective.”