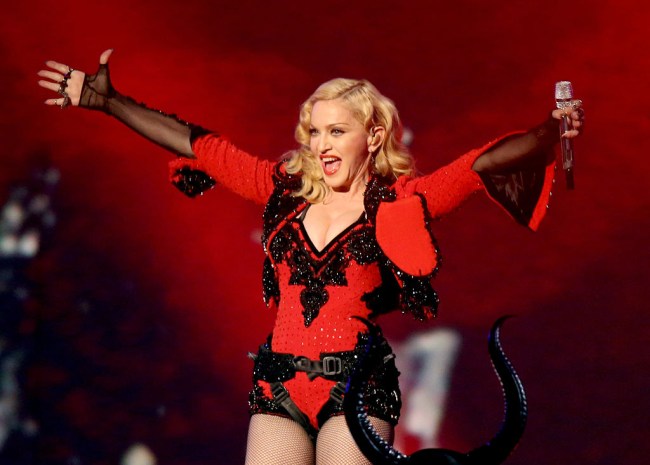 The breakup letter the Tupac Shakur wrote to Madonna was set to go on auction nearly two years ago, but the Material Girl singer initially blocked the sale of the intimate item. Now a court has ruled that the breakup letter may be sold despite Madonna’s protest of the sale.

At 9:30 AM on January 15, 1995, a then 23-year-old Tupac Amaru Shakur wrote a letter from prison to Madonna Louise Ciccone, his girlfriend at the time. Tupac explained that he needed to break up with Madonna because she was white and he was black. While the celebrity relationship was “exciting” for her, it would hurt his “image” by “letting down half of the people who made me what I thought I was.”

“First and foremost I must apologize to you because like you said I haven’t been the kind of friend I know I am capable of being,” the handwritten letter read. “For you to be seen with a black man wouldn’t in any way jeopardize your career, if anything it would make you seem that much more open and exciting. But for me at least in my previous perception I felt due to my ‘image’ I would be letting down half of the people who made me what I thought I was. It no longer matters how I’m perceived.”

“Please understand my previous position as that of a young man with limited experience with an extremely famous sex symbol,” Shakur told Madonna. “I never meant to hurt you.” The letter ends with Tupac inviting Madonna to visit him “face-to-face” in prison.

New Tupac letter reveals his relationship with him and Madonna pic.twitter.com/aV4nxKROCp

Madonna didn’t want the heartfelt and personal letter to go public let alone go on sale. In April, a Manhattan Supreme Court judge rejected Madonna’s lawsuit to stop the sale of the letter because she waited too long to file.

The pop singer filed an appeal in the Appellate Division and attempted to block the auction of the breakup letter. However, the New York State Appeals Court denied Madonna’s appeal on Tuesday according to TMZ.

The appellate court also ruled that Madonna could not pursue claims against her former friend who is selling the letter. Darlene Lutz was Madonna’s a former friend and art consultant from years ago. Lutz got ahold of Tupac’s letter as well as several other of Madonna’s personal items and reached a deal to sell them with the assistance of auction house Gotta Have Rock and Roll Collectibles. The ruling stated that the singer signed a release in 2004 that allowed Lutz to avoid future litigation.

The love letter was set to go on sale on July 19, 2017, but Madonna blocked that auction. The starting bid of the letter was supposed to be $100,000. In the past, Tupac’s letters have sold for more than $170,000. There is no word as to when Tupac’s breakup letter to Madonna will go on sale again.

Tupac explains breakup with Madonna was due to race in 1995 letter: ‘I never meant to hurt you’ https://t.co/9lAJJ2KDxG pic.twitter.com/fqaJz5aK6s

In 2015, Madonna appeared on The Howard Stern Show where she mentioned dating 2pac and how Shakur gave her the mindset to drop a ton of F-bombs on a 1994 appearance on The Late Show with David Letterman. “I was mad at [David Letterman] when I said the F-word a lot,” Madonna told Howard Stern. “I was in a weird mood that day. I was dating Tupac Shakur at the time and the thing is he got me all riled up on life in general. So when I went on the show I was feeling very gangsta.”

Actress Rosie Perez has said in the past that she introduced Tupac to Madonna after the 1993 Soul Train Music Awards.

Mopreme Shakur, rapper and step-brother of Tupac, did an interview with DJ Vlad where he discussed about the secret relationship between 2pac and Madonna.

“Pac had a reputation of the ladies loving him, he was the black James Dean,” Mopreme said of Tupac. “Madonna was still Madonna, people had love for her, respected her.”

“Madonna gave me a note to give to him,” Mopreme said of the note he didn’t read. “I was happy she was giving him a note. Then they linked up. I would take him to her house and sh*t when we got back to LA. They were a thing for a minute.”

Mopreme was asked why the celebrity relationship ended and he replied, “They were kicking it, you know what I mean? I don’t think it was super serious, gonna get married or some shi*t. You know how those entertainment relationships go. They both respected each other so it ended cool.”