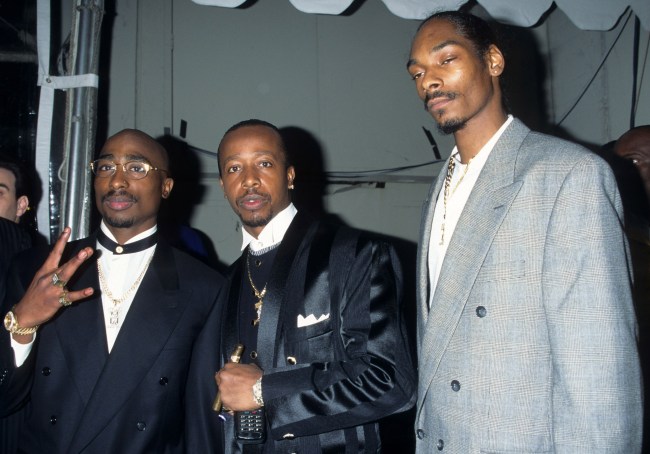 A new documentary series about Tupac Shakur is being made by an unlikely director. A new five-part docuseries about the life of Tupac will be directed by Allen Hughes, a man who sent Tupac to jail after the legendary rapper beat him up.

Director Allen Hughes is best known for his directorial work with his brother Albert Hughes. They Hughes brothers have collaborated to make movies such as Menace II Society, Dead Presidents, From Hell and The Book of Eli. Allen Hughes was applauded for his HBO docuseries The Defiant Ones, that focused on the career and success of the partnership between Dr. Dre and Jimmy Iovine. The docuseries scored a perfect 100% rating on Rotten Tomatoes.

Now Allen Hughes is creating another exciting hip-hop documentary series, this time about the life of Tupac Shakur. Hughes reached a deal with the Shakur Estate that provides him full access to all of Tupac’s released and unreleased recordings, writings and poetry. This docuseries from Interscope Films and MACRO will be the “first definitive, comprehensive project on Shakur with the full cooperation of the estate” according to the announcement.

This is an interesting choice for a director of a 2pac documentary considering that Hughes and 2pac had a tumultuous relationship when the rapper was alive. The Hughes brothers directed 2pac’s music video for the hit single Brenda’s Got a Baby from Shakur’s debut album 2Pacalypse Now. Then the Hughes brothers asked 2pac to be in their Menace II Society and he agreed to do it after he was done filming Poetic Justice.

Allen and Albert Hughes were making the Menace II Society movie and cast Tupac Shakur to play Sharif. There was “creative differences” between the Hughes brothers and Tupac to the point that Shakur quit or the Hughes brothers fired him depending on who you ask.

Mopreme Shakur, Tupac’s step-brother and member of the hip-hop group Thug Life, said the “Hughes brothers got too big for their britches and sorta disrespected Pac and Pac wasn’t having it at all.”

“Pac let the Hughes brothers direct Brenda’s Got a Baby video, Pac put them on, that was one of their first big breaks,” Mopreme told Vlad TV on the music video that debuted on October 20, 1991.

Mopreme said the Hughes brothers were “acting all Hollywood.” “They acting all fly, all slick and talking sh*t,” Mopreme alleges Tupac said. “They got all arrogant and sh*t.”

RELATED: Tupac Is Alive According To Conspiracy Theory With Updated Photo Of The Legendary Rapper

California rapper Spice 1 was shooting his music video featuring Tupac that was directed by the Hughes brothers. He witnessed the aftermath of Allen Hughes getting beat down by Tupac.

“Allen Hughes was running up a hill” after being chased by Tupac’s entourage. Hughes got beat up “pretty bad” and they had to call an ambulance according to Mopreme. “Pac was a strong dude, he used to lift weights all the time, he didn’t like being weak,” Mopreme added.

Spice 1 says that the animosity started when the Hughes brothers fired Tupac from Menace II Society and they didn’t tell him. Tupac found out about it from a newspaper article and was extremely upset.

Tupac had Johnny Cochrane represent him in the court case. In 1994, Tupac was sentenced to 15 days in L.A. county jail and 30 days of community service.

Last March, JOE TV asked Allen about Tupac and the fight. “What the beef was over he was experiencing massive fame because of Juice and his second album at that time, and his diet — few people know this — consisted of weed, chicken wings and Hennessey. Fame, chicken wings, Hennessey and weed… not a great mix,” Allen said in the interview.

“And that was it. On one level, Tupac was one of the sweetest people I ever met. He apologized in Vibe magazine [a few] months before he died. I didn’t really come to peace with it until I was done with The Defiant Ones.”

In a Vibe magazine interview from 2009, Allen said Tupac didn’t beat him up in the now infamous fight. “The biggest misnomer is that me and Tupac got into any fight,” Allen said. “It was me and 12 Crips that he got to jump me. He didn’t do sh*t.”

“Tupac was an artist. Tupac was not a gangbanger,” Allen said. “Tupac could not fight to save his motherf*cking life. I know that for a fact. He was an immensely gifted person and he was far, far, from a thug. I think that’s just years of frustration that just came out.”

While Tupac Shakur died at the age of 25 after being killed in a 1996 drive-by shooting in Las Vegas, there is plenty of material to cover about the iconic rapper. The project does not yet have a title, release date or an outlet that will air the Tupac docuseries.