Nick ‘Suns In Four Guy’ McKellar Parties With Jamal Murray During NBA Finals, Makes The Most Of His 15 Minutes 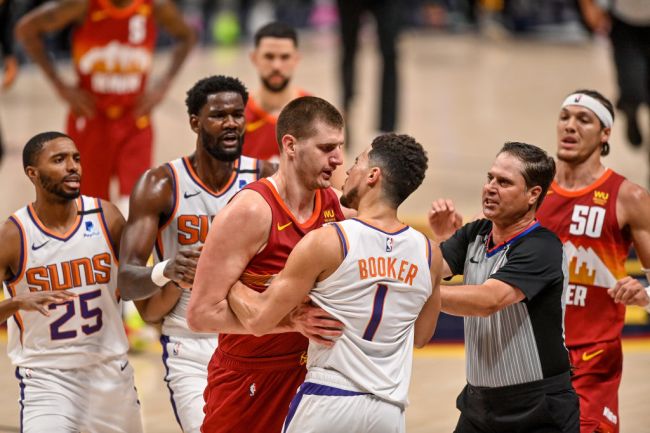 Whether you like it or not, Nick McKellar is the NBA’s newest celebrity. After being treated like a celebrity by Phoenix fans, he is expanding his fandom to other NBA stars. And not just those from the Suns.

McKellar posted at Riot House in Scottsdale, Ariz. with Denver Nuggets star shooting guard Jamal Murray last night after game one of the NBA Finals (which the Suns won 118-105).

In case you are a month behind in the news cycle or not a fan of the NBA, McKellar is (in)famous— depending how you look at it— for the “Suns in four” fight. What makes last night’s Instagram post even crazier is that the fight happened during game three of the Suns and Nuggets playoff series. Against a guy who was wearing none other than a Jamal Murray Nuggets jersey.

It is worth mentioning that Murray was sidelined in the playoffs with an ACL injury. But in this situation, nobody is suffering more than the Nuggets fan McKellar beat. The Suns swept the Nuggets, he lost terribly in a viral fight and now Murray is posing with his foe? Might be rock bottom.

In the video, Murray can be seeing whispering to McKellar. People were quick to make jokes about Murray “separating” himself from the Nuggets fan in the fight, but he cleared the air this morning.

Regardless if you believe McKellar should be famous or not, you have to respect his ability to take advantage of his 15 minutes of fame.