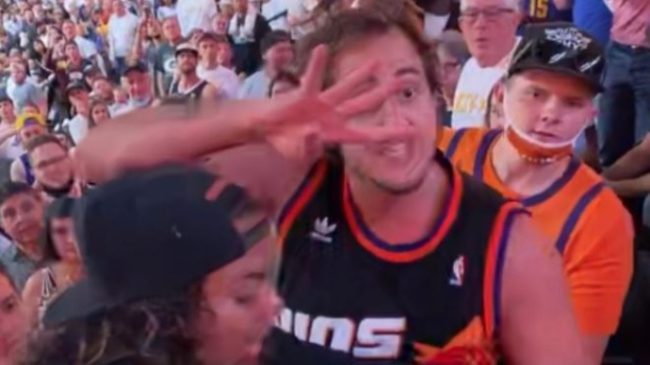 It’s only been a week since Nick McKellar beat down two Nuggets fans and yelled “Suns in 4” but since then he’s blown up and is now a celebrity in Phoenix.

On Sunday afternoon, the Denver native made his way to Phoenix to attend game 1 of the Western Conference Finals thanks to Devin Booker who gifted him with free tickets to the game.

Before the game, McKellar teamed up with a clothing brand to give away free “Suns in 4” shirts to fans entering the arena.

Several fans walking into the arena with this “Suns in 4” guy t-shirt that's being handed out by someone outside, via @NotoriousOHM. pic.twitter.com/jutuoRBKT8

While inside Suns fans lined up to take a picture with McKellar.

Suns In 4 Guy is in the building 👀

here’s the suns in 4 guy pic.twitter.com/KLSfFILjQm

Suns in 4 guy has become an absolute legend…. pic.twitter.com/YkRTG68FFo