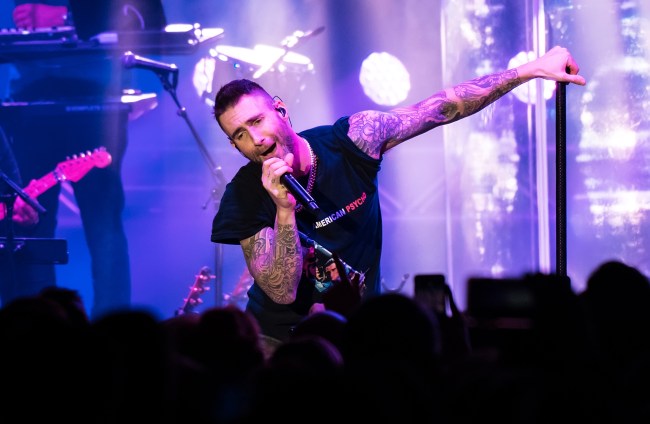 Playing the Super Bowl Halftime Show is one of the biggest honors of any musician’s career. I mean, when you get an audience of hundreds of millions of people, that’s kind of a big deal, you know? From Michael Jackson to, most recently, Justin Timberlake, it’s a chance to show that you’re one of the biggest musical talents on the planet.

Problem is, this year’s Super Bowl Halftime Show isn’t getting quite as much love as it might have in the past, and, because of that, the group picked to play the gig, Maroon 5, literally can’t find a single person to collaborate with on stage. Yeah, it’s pretty embarrassing.

That’s according to a report from Us Weekly, per AV Club, who was told by a source that Maroon 5 is “is having a lot of trouble finding guests” to perform with them. Oddly enough, it’s not for the reason you’re probably thinking — so save all the hate about Maroon 5, guys.

The real reason Maroon 5 can’t find anyone is because of the ongoing boycott from some musicians against the NFL, with some openly saying that they won’t work with the league until Colin Kaepernick is back in the league. Yep, that’s how deep of an issue that is. Per the source to Us Weekly, “no one wants to associate themselves with the NFL.”

Maroon 5 had hoped to get Cardi B to join them for the Super Bowl Halftime Show — as she performs on one of their latest songs, “Girls Like You”, but, apparently, “as of today, she’s not,” per Us Weekly‘s source. The sourced added that Cardi’s “been going back and forth, but it’s a no right now.” And, last February, Cardi B told TMZ that she wouldn’t perform unless “they hire Colin Kaepernick back.”

The Colin Kaepernick issue has driven away other potential options for the Super Bowl Halftime Show, like Rihanna, so the fact that Maroon 5 can’t get anyone to play with them is pretty surprising. Who knew it went this deep? Regardless of how you feel about the former quarterback’s silent protest by kneeling during the national anthem, it’s impressive to see others stick to their guns in their own protest against the league.

Given the sensitivity of the Kaepernick issue, there’s even a petition for Maroon 5 to pull out of the Super Bowl Halftime Show, too, so it’ll be interesting to see if anyone decides to share the stage with them come February 3. And, if someone does, if they’ll get any backlash because everyone else decided not to.