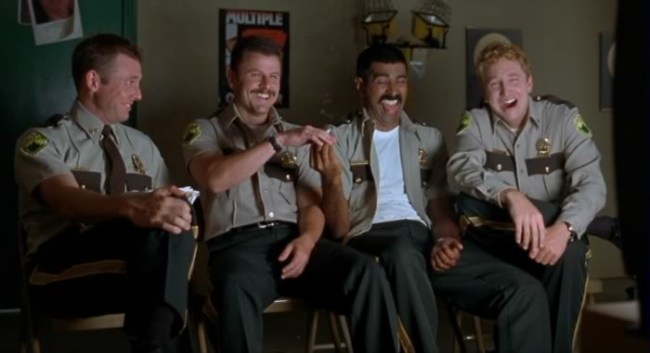 Marvel approached Jay Chandrasekhar of Super Trooper fame to possibly direct an upcoming MCU movie. I’m freaking out man. The member of the Broken Lizard crew and director of Beerfest revealed that he could be involved with a new Marvel flick.

Chandrasekhar gave an interview with Syfy Wire where he detailed the exciting encounter with Marvel:

“They sent me the Marvel Encyclopedia and they said, what do you guys want to do? So, it’s upstairs. My kid’s going through it. And he’s going to make a list of what he thinks we should do, and I’ll go through it. I’m curious to see what a 13-year-old’s mind comes up with. There are certain ones that are owned by Fox, so you can’t do those. But there are plenty of people there — I mean, look at Deadpool. You’re like, well I didn’t know you could do that. Great. Let’s do something like that. Right?”

Marvel has NOT approached the Broken Lizard team. Kevin and I had a general meeting there to chat about future ideas. Nothing more.

Marvel is searching for writers and directors for their slate of Phase 4 movies. The final Phase 3 movie arrives in 2019 with Avengers 4. After that the Spider-Man: Homecoming sequel begins Phase 4 on July 5, 2019. Marvel may want to explore a comedic take on the comic book movie a la Deadpool, where Chandrasekhar would shine. Rumor has it that Chandrasekhar could be selected to direct a movie based on The Eternals. Perhaps, the new franchise could be introduced in Guardians of the Galaxy Vol. 3, allowing Chandrasekhar to collaborate with James Gunn.

Besides all of the great Broken Lizard films and the Dukes of Hazzard movie, Chandrasekhar has much more directing experience than most realize with credits on such big-name TV shows such as New Girl, The Goldbergs, Fresh Off the Boat, Community, Psych, Chuck, Crazy Ex-Girlfriend, Blue Mountain State, and Knight Rider. Imagine Ikaris challenging Druig to a maple syrup chugging contest to see who will be the Prime Eternal?