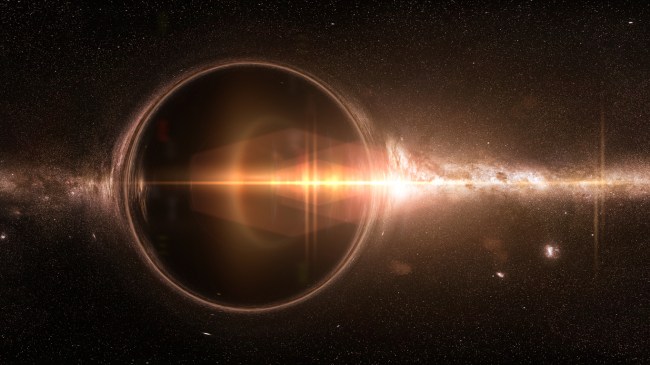 Astronomers witnessed a phenomenon involving the closest supermassive black hole to Earth and scientists have no idea what the “unprecedented” event actually was.

Scientists were recently observing the black hole known as Sagittarius A* (Sgr A*) that is located in the center of the Milky Way. Astronomers used the Keck II Telescope in Hawaii to observe the supermassive black hole that is only 26,000 light years from Earth, which is somewhat close in the scope of the gigantic universe.

During the observation of the black hole last spring, astronomers witnessed a long flash of light or short-lived glowing illumination coming from Sagittarius A*, which is approximately 4.6 million times more massive than the sun.

For a few hours on the night of May 13, 2019, UCLA astronomer Tuan Do and his colleagues witnessed Sagittarius A* became 75 times brighter in the near-infrared band of the light spectrum. The Keck II Telescope on the summit of Mauna Kea in Hawaii captured the bizarre light show.

Here's a timelapse of images over 2.5 hr from May from @keckobservatory of the supermassive black hole Sgr A*. The black hole is always variable, but this was the brightest we've seen in the infrared so far. It was probably even brighter before we started observing that night! pic.twitter.com/MwXioZ7twV

Black holes have such unimaginable gravitational pull that nothing can escape its grasp, even light is swallowed by stellar mass. However, scientists are able to observe the interactions between black holes and bright stars or neighboring dust clouds. When a black hole devours nearby celestial objects, the energy released produces a light that can be seen by telescopes. This boundary is known as the event horizon.

“The flaring is not visible in optical light. It’s all happening in the near-infrared, the portion of the infrared spectrum closest to optical light,” Universe Today reported. “Astronomers have been watching Sgr. A* for 20 years, and though the black hole does have some variability in its output, this 75 times normal flaring event is like nothing astronomers have observed before. This peak was over twice as bright as the previous peak flux level.”

“The brightness of Sgr A* varies all the time, getting brighter and fainter on the timescale of minutes to hours—it basically flickers like a candle,” Do said. “We think that something unusual might be happening this year because the black hole seems to vary in brightness more, reaching brighter levels than we’ve ever seen in the past.”

“The black hole was so bright I at first mistook it for the star S0-2, because I had never seen Sgr A* that bright,” Do said. “Over the next few frames, though, it was clear the source was variable and had to be the black hole. I knew almost right away there was probably something interesting going on with the black hole.”

Scientists are not exactly sure what caused the burst of light but they have a few hypotheses. Do and his colleagues speculate that a nearby star, a star named S0-2 that is 15 times larger than the sun, could be the prime culprit. In 2018, S0-2 came within 17 light hours of Sagittarius A*. The star’s incredibly close elliptical orbit flyby may have disturbed the gases at the event horizon.

Another explanation for the bright lights could have been a dust cloud named G2. In 2014, G2 came as close as 36 light hours from Sgr A*. Scientists expected the black hole obliterating G2, but the close encounter was described as “boring” for astronomers. However, the collision may have been a slow burn and we are just now seeing the galactic light show.

“Maybe the black hole is waking up—there’s a lot we don’t know at this point so we need more data to understand if what we are seeing is a big change in what is feeding the black hole or this is a brief event,” Do hypothesized.

The findings were published in the Astrophysical Journal Letters in a paper titled “Unprecedented variability of Sgr A* in NIR.“

RELATED: Lunar Lander Crashed On The Moon And Unleashed Thousands Of Tardigrades, The Most Resilient Animals Known To Man