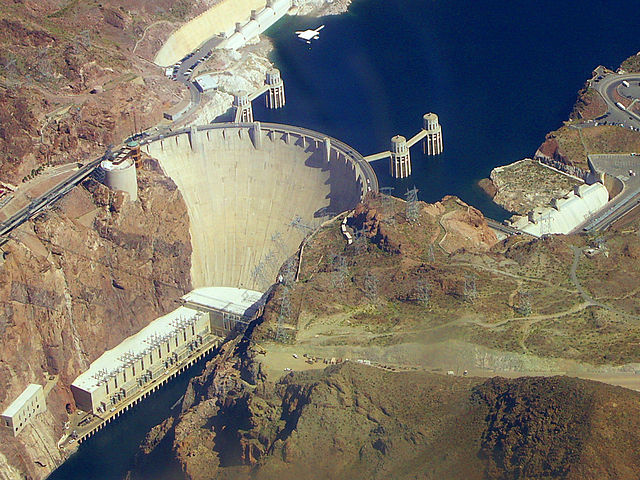 Don’t let anyone tell you that you can’t accomplish greatness. Especially if you have been on a two-day bender for a bachelor party in Las Vegas. Arron Hughes, a 28-year-old man from the U.K., didn’t give a care about being sucked under the surface of the water and impressively swam across the Hoover Dam reservoir. He is believed to be the first person to ever achieve this dangerous feat.

Arron was in Las Vegas for a bachelor party and they were doing some sightseeing at the Hoover Dam, but Mr. Hughes doesn’t seem to be one for sightseeing. “It was around 45-50 degrees outside [over 100 degrees Fahrenheit] and we were on a stag do in Vegas,” Hughes said. “We were all just standing there and I thought, Fuck it, I’m going for a swim. I got to the bottom and thought, I can make that. You go to Vegas to have fun, don’t you? We made the ‘Hangover’ movie look tame.”

“We sat in the back of a truck driving from Vegas to the dam, then when we got there, I just thought, let’s do it, why not, I think I can make this, so told the lads I was off,” he said. “Got sucked in, well pushed by, the flow of the dam, so had to swim hard to make the other side. It was tough.” Yeah, a dam isn’t a fancy pond, especially the Hoover Dam which is 1244-feet-long, 660-feet-thick, and 726-feet-high and has 17 turbines.

Whether Mr. Hughes understood that the dam’s turbines are hella strong and could have killed him is up for debate and after partying hard for 37 straight hours I don’t think he gave a shit. Probably the only reason that Arron didn’t die was because only one of the hydroelectric turbines were in operation on August 10, the day of his stunt.

Hughes, a forklift driver who is from Ruthin, Wales, swam from Nevada to Arizona in about 30 minutes. And he is believed to be the only person to have swam across the Hoover Dam reservoir. “It was a brilliant holiday,” Arron said. “First person to ever make it, and probs the last — Vegas, baby!”

Once he was safe on the other side, Arron was arrested, fined $330, and charged with “Jumping, diving, swimming from dam’s spillways or other structures.” “Then the police were waiting for me at the other end — arrested me, gave me a fine, and said they were shocked I’d made it.”

What might be most amazing is that Arron said he hadn’t done much swimming “since I was about 6, 7, though, but I do crazy jumps off cliffs around here.” He did say that he is “a good all-rounder at most sports.” Yeah, that doesn’t make you a great swimmer with a crazy current pulling you underwater.

Here are some quotes from Arron Hughes, who is a Conor McGregor if he wasn’t a world famous professional boxer and he liked to swim in massive dam reservoirs for shits and giggles.

And he had a special message for his “haters.”

“Bollocks to all the haters and boring bastards, when I die I will take this to the grave with pride, not regret.”

Here’s a fun fact about Arron Hughes that probably won’t surprise you.

“I don’t have any regrets. I even have a tattoo saying ‘no regrets.’ That’s the type of person I am.”

Keep doing you Arron Hughes and don’t let anyone tell you what to do, but I’m sure you won’t listen anyway.