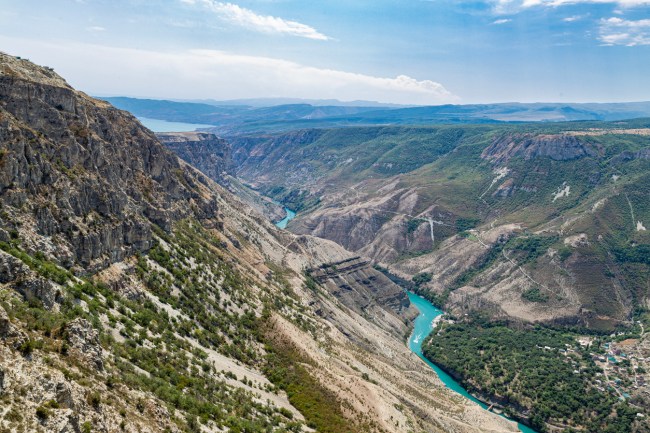 Two women were very lucky to walk away from a surely fatal swing snap in Russia this week. A gut-wrenching video shows the moment that the pair were thrown from the swing at the top of a 6,300-foot canyon.

Moment two women fell off a 6000-Ft cliff swing over the Sulak Canyon in Dagestan, Russia.
Both women landed on a narrow decking platform under the edge of the cliff & miraculously survived with minor scratches.
Police have launched an investigation. pic.twitter.com/oIO9Cfk0Bx

Sulak Canyon in Dagestan vallies at more than 6,300 feet. To compare, that is at least 300 feet larger than the deepest point in the Grand Canyon.

I am completely unsure who had the idea to put a glorified porch swing atop the canyon, but it wasn’t a good one. Nevertheless, Russia is going to Russia.

What happened and were the women okay?!

In the horrifying video, two women can be seen on the swing and being pushed out over the canyon. Screams of adrenaline and laughter amongst those watching quickly turn to sheer fear when the chain snaps.

It seems as though the pusher was not able to keep a direct, back-and-forth pendulum momentum and the swing started to swerve. The exact moment when the incident occurs cannot be seen.

However, it sounds and looks as though the swing made contact with one of the sides. When that happens, the chains buckle, tension is broken, and the cords on either side come loose.

The two women are sent flying off of the front, over the edge of one of the deepest canyons in the world.

#UPDATE : In Dagestan, two girls, riding on a swing, fell down the Sulak canyon. Fortunately, they almost did not suffer – they got off with bruises. Eyewitnesses helped the girls to get out. pic.twitter.com/HkjzMPJa0j

Fortunately, in a miracle, the women landed on a small wooden platform right below the swing. Instead of plunging to their deaths, they only suffered some minor bruises and scratches.

Hanging on for literal dear life, the onlookers pulled them back up to safety.

This definitely shouldn’t be a thing…

After the heart-stopping incident, local police have reportedly launched an investigation into the swing. The Ministry of Tourism is Dagestan said that the swing “did not meet safety standards.”

As a result of the near-deadly accident, local Kazbekovsky council are expected to demand that the swing be removed, which is p̶r̶o̶b̶a̶b̶l̶y̶, most definitely for the best.