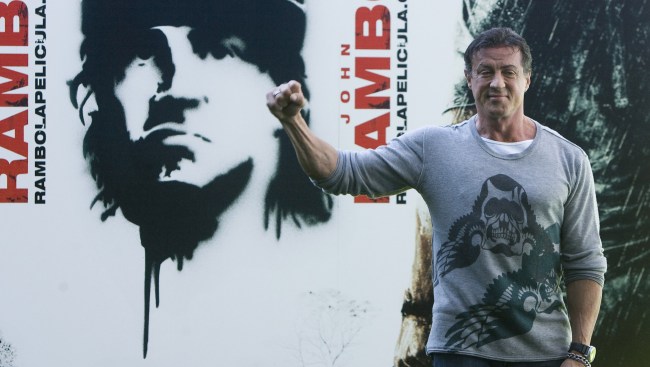 We have already seen a few images from the film, and the first one we saw was not exactly what we expected. Thankfully, some followup pics looked a bit more Rambo-like.

We also know that Sly’s co-star in Rambo V: Last Blood will be Spanish actress Paz Vega, who according to The Hollywood Reporter, will play Carmen Delgado, a reporter who covers the Mexican drug trade and whose younger half-sister has been kidnapped.

John Rambo, now living on a ranch in Arizona and still struggling with PTSD, reportedly does what Rambo does, and “what ensues is a violent descent into hell as Rambo uncovers a sex-trafficking ring. He teams up with a journalist whose half-sister has also been kidnapped and must deploy all his skills to save the girls and bring down a vicious crime lord.”

Unfortunately for Stallone, it’s been 37 YEARS since he first took on the role of Vietnam vet John Rambo in First Blood so the ole body doesn’t snap back quite the same way it did back in 1982.

“Hey, it’s been a long time since I’ve been in the gym because I’ve been out there doing Rambo, which caused a lot… of… damage. So now I’ve got to fix things,” shared Stallone.

“Coming back here, let’s face it, it’s not easy. Who wouldn’t rather be in bed just relaxing a little bit? But listen, life is like a movie. You gotta star in your own feature. And if you want to play the lead, you got to get out there and go after it. See you soon.”

Bro is a machine.

He’s going to still be doing action movies when he’s 90, isn’t he? Love it.