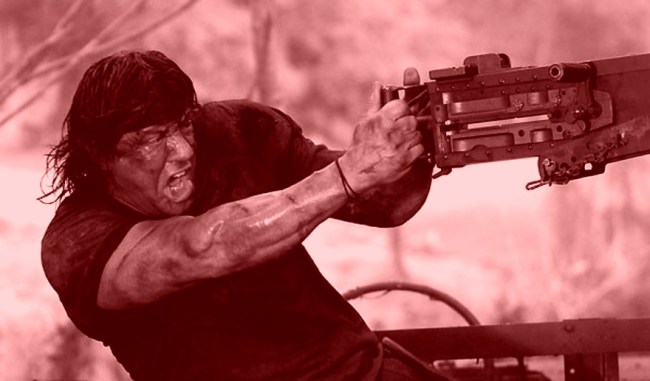 Last week, the first images of Sylvester Stallone’s latest cinematic opus, Rambo 5, hit the internet and, ummm, it was NOT what we expected.

Instead of seeing what we expected, say, something like this…

We got John Rambo looking like a character straight out of Red Dead Redemption 2.

Now, with a week of letting those images sink in, we are back to being officially psyched as the movie is reportedly full-steam ahead in production.

We even have an official title and know who Sly’s female co-star will be in the film.

The movie will be called Rambo 5: Last Blood, and in an excellent blast from the past, Spanish actress Paz Vega will be co-starring alongside Stallone.

The last time most of us saw the 42-year-old Vega was… Spanglish? In 2004? She also voiced the Andalusian triplets in Madagascar 3: Europe’s Most Wanted, but other than that? Vega’s pretty much limited all of her acting to movies and TV shows in Spain.

According to The Hollywood Reporter, “Vega will play Carmen Delgado, a reporter who covers the Mexican drug trade and teams up with Rambo after her younger half-sister is kidnapped.”

This jibes with the previously reported synopsis of the movie which said Rambo will be found living on a ranch in Arizona, wrestling with PTSD, when a friend informs him that her granddaughter has gone missing after crossing into Mexico for a party.

“What ensues is a violent descent into hell as Rambo uncovers a sex-trafficking ring. He teams up with a journalist whose half-sister has also been kidnapped and must deploy all his skills to save the girls and bring down a vicious crime lord.”

As for Vega, not only will she be appearing in Rambo 5: Last Blood, she is also set to star in the second season of Netflix’s The OA.

Check out a couple of new images from the set below…

“It’s so rewarding after so many years in the Biz to be truly excited about being in an extraordinary scene,” he wrote.