Yes! Sylvester Stallone Reportedly Set To Dole Out Some Justice On A Mexican Cartel In ‘Rambo 5’ 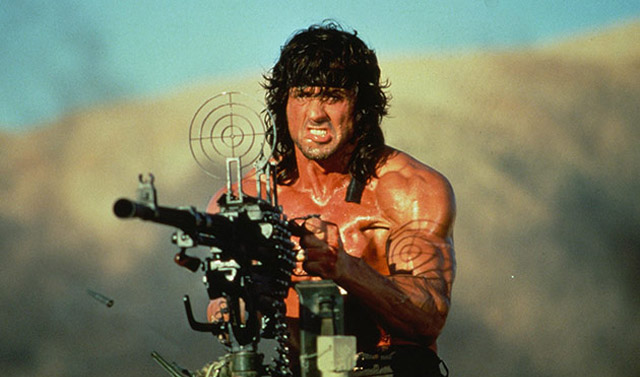 Wayyyyy back in 1982 the world was introduced to Vietnam War veteran John Rambo in the film First Blood and was very much the better for it. And now, thirty-six years later, it sounds like Rambo still has some unfinished business he has to take care of down Mexico way.

However, this is not the first time Sylvester Stallone has teased with another appearance of Rambo. Back in 2008, Sly said he was “half-way through” writing Rambo 5. Back then the plot was said to involve Rambo’s daughter being kidnapped by the leaders of a cult.

Then in 2009, after getting the green-light from Millennium Films, and the plot was rumored to “revolve around Rambo fighting his way through human traffickers and drug lords to rescue a young girl abducted near the U.S.-Mexico border.”

Stallone later said in 2009 the film would instead be loosely based on the 1999 James Byron Huggins novel Hunter and called Rambo V: The Savage Hunt. Then the plot reportedly went back to involving Mexico.

In 2010, Stallone told Empire, “I think Rambo’s pretty well done. I don’t think there’ll be any more. I’m about 99% sure. […] for Rambo to go on another adventure might be, I think, misinterpreted as a mercenary gesture and not necessary. I don’t want that to happen.”

Then, in late 2014, Stallone said he was going to make Rambo: Last Blood.

In 2016, Stallone again said he was done with John Rambo, telling Variety, “The heart’s willing, but the body says, ‘Stay home!'” Of course a few months later he was talking about Rambo 5 again.

And now, NOW, Stallone is DEFINITELY, probably going to finally star in the fifth and final (?) film in the Rambo series, according to Screen Daily.

Sylvester Stallone is attached to reprise his role as former Green Beret John Rambo in Rambo V, which Millennium Media will bring to Cannes this week.

Production on the fifth instalment in the 36-year franchise that famously launched with First Blood in 1982 is scheduled for a September 1 start and will encompass London, Bulgaria, and the Canary Islands.

As for the plot, get ready for some legendary Rambo action. (Never forget, they drew first blood.)

Stallone’s return to action in the long-running series finds him living in a ranch in Arizona, deeply troubled and wrestling with PTSD as he picks up casual work wherever he can.

When long-time family friend and estate manager Maria informs Rambo that her grand-daughter has gone missing after crossing into Mexico for a party, he sets off with her to find the youngster.

What ensues is a violent descent into hell as Rambo uncovers a sex-trafficking ring. He teams up with a journalist whose half-sister has also been kidnapped and must deploy all his skills to save the girls and bring down a vicious crime lord.

“Nothing is over! Nothing! You just don’t turn it off!”