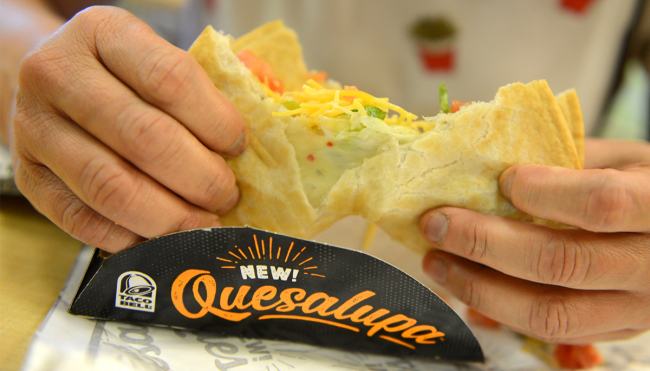 In 1924, Robert Frost won a Pulitzer Prize for the poem “Nothing Good Can Stay,” and almost a century later, no one is working harder to prove that axiom is true than Taco Bell.

Taco Bell has long been at the forefront when it comes to concocting culinary creations nobody knew they needed until the chain unleashed them on an unsuspecting world. However, if we’ve learned anything over the past few years, it’s that you want to avoid getting emotionally attached to any of their many stoner-friendly innovations unless you want to set yourself up for crushing disappointment.

Since 2019, the Taco Bell menu has been subjected to a fairly drastic culling that’s led to the tragic disappearance of longtime staples including the Doritos Locos Taco, the Mexican Pizza, and everything containing potatoes. However, it’s done what it can to placate the masses by continuing to test out new items in addition to resurrecting some fan favorites—like the Quesalupa, which made its glorious return in March after being discontinued in 2016.

Unfortunately, it appears this retroactive stay of execution has been lifted. According to Entrepreneur, anyone who wants to get their hands on a chalupa with a quesadilla as a shell at the restaurant will only be able to do so until the end of May (although it appears it’s already vanished from some locations).

Taco Bell removed the quesalupa before I got it again, don't text

I'm playing my emo playlist until I emotionally recover pic.twitter.com/cB18ukEGUj

I have an announcement to make:

Me and @tacobell are getting a divorce

They took away the Quesalupa

So im taking my money elsewhere

Remember: don’t cry because it’s over. Smile because it happened.