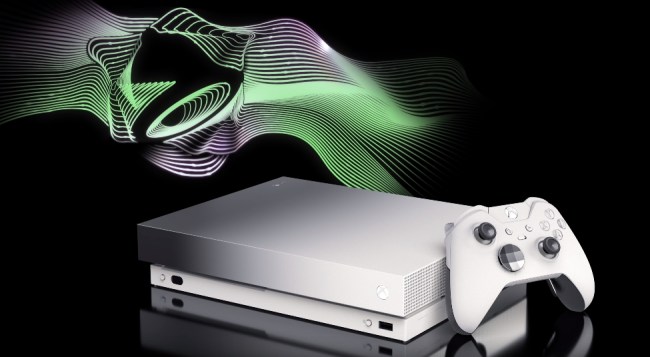 Taco Bell and gamers have always had a great relationship and the lovefest continues as the chalupa purveyor is giving away a ton of special Xbox One X consoles. Taco Bell teamed up with Microsoft for a delicious giveaway where you can win an Xbox One X Platinum Limited Edition Bundle. The best part is that to snatch up one of these limited-edition gaming consoles all you have to do is stuff your face with Taco Bell, but you were probably already going to do that so you’re really not putting any effort into winning a special edition Xbox One X.

Simply walk into your local Taco Bell or roll into the drive-thru and inform the friendly Taco Bell employee that you would like a Double Chalupa Box, which only costs $5 plus tax. Then text the code found on the Double Chalupa Box. That’s it. That’s all you have to do to win a brand new Xbox One X. But you don’t just get a limited-edition platinum Xbox One X, you also get an Xbox Elite controller, three months of Xbox Live Gold, and three months Xbox Game Pass. 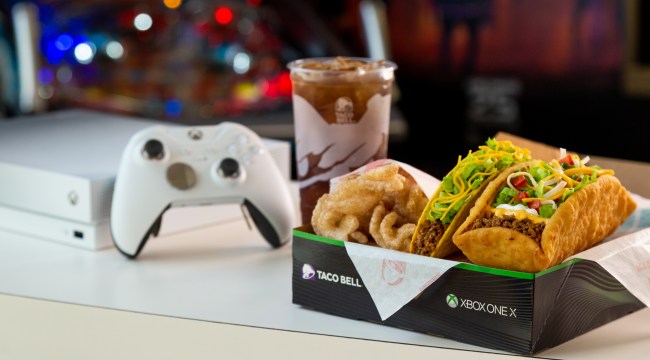 Taco Bell is giving away a shitload of these Xbox One X consoles and they say that one person will win an Xbox One every ten minutes on average and will be delivered to fans within 72 hours after being declared a winner. From October 18th until November 21st, Taco Bell is gifting approximately 5,000 Xbox One X Platinum Limited Edition Bundles. The special edition Xbox One X will pay homage to Taco Bell by playing the Bell’s trademark “bong” noise heard during the fast food giant’s commercials instead the normal Xbox One’s startup sound.

Now there are some rules. You have to be a resident of the United States, at least 18-years-old or older. Also, you are limited to one entry per day, even if you eat first, second, third, and fourth meal at The Bell. But you can save those codes to use the following day.

Here is the small print from Microsoft:

NO PURCHASE OR PAYMENT NECESSARY TO ENTER OR WIN A Purchase will not increase your chances of winning a prize. The Taco Bell® and Xbox® Game starts on 10/18/18 at 12:00 AM PT and ends on 11/21/18 at 8:59:59 PM PT. See Official Rules for details on how to enter without a purchase, prize details, restrictions, and terms and conditions of participation. Open only to legal residents of the 50 U.S. states and DC, 18 years or older at time of entry. 1 entry per day. Void where prohibited. By texting the short code you are providing your signed consent to receive up to 20 autodialed text messages related to the promotion. Consent to receive text messages is not required or a condition of any purchase. Msg & Data rates may apply for each text message sent and received. To cancel, send STOP to 72823 (confirmation text will be sent). For help, send HELP to 72823. Check wireless plan for details. A potential winner will be notified on average every 10 minutes during the promotion. Sponsors: Taco Bell Corp., Irvine, CA and Microsoft Corporation, Redmond, WA.