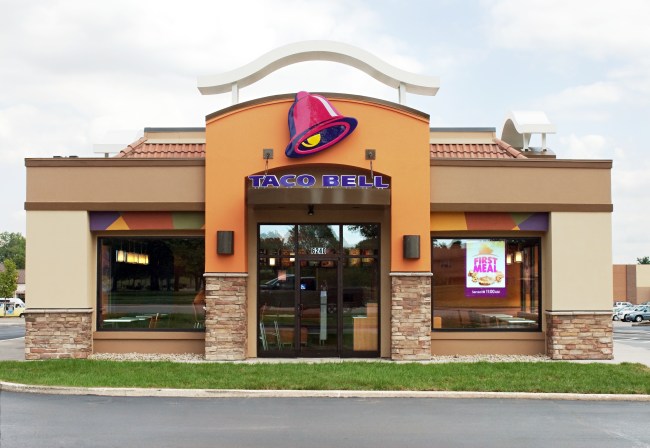 As the saying goes, the only constant in life is change.’

A couple weeks ago, Taco Bell announced that they’re making big changes to their menu. Beginning August 13, the fast food chain is “simplifying” their menu by dropping some venerable favorites. All things considered, 12 items are being removed from the Taco Bell menu so each restaurant can become “more efficient,” according to the company. This means saying goodbye to the following:

The chain made a very similar move last August, dropping the menu to 10 combos and dropping items like the Cool Ranch Doritos Tacos.

Nevertheless, the news of the menu revamp during the middle of a pandemic, when nerves are already sky-high, shook Taco Bell fans to their core. Some questioning the timing of such a dramatic change to beloved comfort food:

So what does Taco Bell have in the cooker? A limited time $5 Grande Nachos Box, according to the company, but apparently it’s testing one of the most beloved snack foods in America:

The restaurant chain is officially calling it the Crispy Chicken Wings.

Foodbeast got to try the Taco Bell wings, which are apparently served in a box of five wings with a side of Spicy Ranch as a dip (…no bleu cheese? boo). It costs $4.99 per order.

It’s important to note that these aren’t boneless wings: They’re traditional bone-in wings in a breaded coating, served as drums and flats. 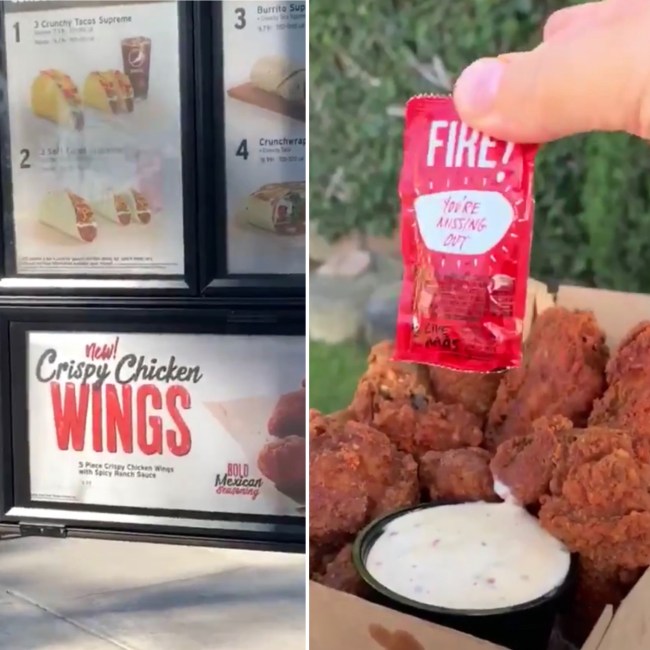 So, how do they taste? According to Foodbeast:

He told me that the wings themselves were “very crispy,” and had a mild Taco Bell seasoning flavor to them. “I would have loved something like their Volcano Sauce mixed with the ranch, or the Volcano Sauce on its own,” he mentioned.

Still, to him, “Taco Bell nailed it on what they’re good at, textures. The flats did what they needed, the drums were crispy, had a fair amount of meat.”

Look, I love Baja Blast and tequila as much as anyone, but I find it hard to believe that Taco Bell is going to bring a lot to the table in the takeout wing game, even when they’re soaked in a couple packets of Fire or Diablo sauce. Wingstop, B-Dubs, and tons of other chains are already focused on dominating the wing game.

That said, Taco Bell wings are presumably a supply chain move that makes sense when you consider the restaurant’s parent company, Yum Brands. They already own two brands (KFC and Pizza Hunt) that serve similar-looking chicken wings on the reg, so you have to imagine their wholesale costs with suppliers are pretty favorable.

No word on when Taco Bell wings could potentially move out of a one-off test near the company’s headquarters in Irvine to a wider test and eventual roll-out. Considering that fall is peak wing season, one could presume it will be available soon, depending on customer reactions.

Serious question, why would anyone go to Taco Bell for chicken wings? They removed potatoes from their menu for that??

Seems like @tacobell testing chicken wings?? Found these in Fullerton, CA. More on these as we dive in… pic.twitter.com/Zvk0Z8kkfa