Tasty Tune Tuesday 3/9: The Sixteenth Edition Is Mainstream With A Dash Of Off The Beaten Path 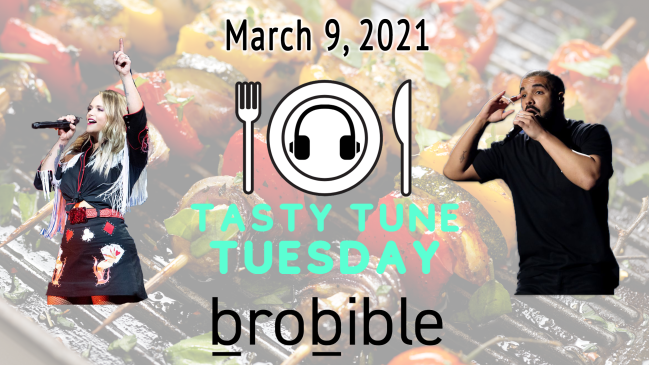 Welcome back to another edition of Tasty Tune Tuesday! We had a good bit of new music drop over the weekend and it’s worth tapping into some of the big hits and unknown gems. On the third day of every week, I’ll drop ten songs that tickle my eardrums. Variety of tracks will range from hip hop/rap, EDM, country, singer/songwriter, Americana, R&B and everything in between— something for everyone depending on what I’m jamming that week.

This week’s collection is focused on getting the message out to the right ears. Here’s the tracklist:

Drake surprised us with a trio of new songs on Friday and this is by far the best one. Rozay takes everything he hops on to the next level and the female sample in the background is awesome. It’s so good.

This one will catch your ears. Production is sleek, the bassline is rhythmic and the groove is sick. It all comes together with some super chilled-out vocals.

Straight out of Harlem, this song is as New York rap as it gets. And the horns!!

Miranda Lambert and I have a very love-hate relationship. I don’t often enjoy the mainstream things she puts out, but she also has a few of my all-time favorites that you won’t find on the radio. This song is a preview for a project that is slated to be pretty awesome. She is joining Texas singer-songwriters Jack Ingram and Jon Randall for a stripped-down collection of raw country songs and if it’s anything like what we have here, it’s going to be lovely.

I don’t know what kind of traction this song has received on the charts, but here is an introduction for those who haven’t heard. These two are a perfect pairing. They’re supposed to release a few more tracks together and we are the better for it.

Having dropped around this time last year, ‘Best Interest’ was a a musical detour from one of the most intriguing personalities in pop culture. It falls just over two minutes, but Tyler doesn’t waste a single second. He combines wonderful production with his typical unique lyricism here.

Moon Vs Sun is made up of married couple Raine Maida and Chantal Kreviazuk. They’ve written individually for artists that range from Drake to Shakira to Avril Lavigne, but don’t let that fool you— their sound is nothing like those three. The two have decided to team up for an upcoming album and this single stands out. Each of their voices standalone, but they complement one another really well. File them somewhere between Sarah Bareilles, Death Cab For Cutie, Florence and the Machine, and Mumford and Sons.

What’s great about Midland goes beyond their sound. They’re signed with Big Machine records and have significant influence from some of the best writers and producers in the game, like Dan Huff, Shane McAnally and Josh Osborne. There is still a lot of growth to be had, but their ability to revitalize the authentic sound of country music to the mainstream is what they do best.

Birmingham-born, Nashville-based. The Brook & The Bluff are one of the best kept secrets in music right now.