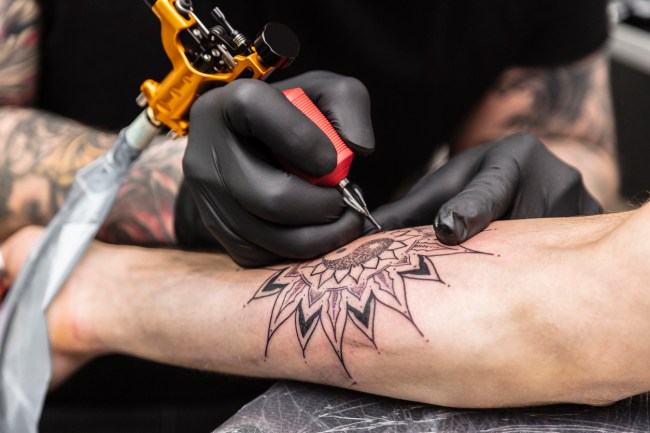 Do you regret getting that “Gangnam Style” tattoo or that “Human Centipede” tattoo? It turns out you may have another regret about your abominable ink – it could harm your sweat glands.

A new study titled “Skin tattooing impairs sweating during passive whole-body heating” was published in the Journal of Applied Physiology. The study had a mission to find out if tattoos are dangerous. Researchers discovered that skin with tattoos perspires less than ink-less skin.

“Tattooing of the skin involves repeated needle insertions to deposit ink into the dermal layer of the skin, potentially damaging eccrine sweat glands and the cutaneous vasculature,” the study reads.

The study of 10 tattooed individuals had the participants wear tube-lined suits that circulate hot water as much as 120 degrees for 30 minutes or more to induce sweating. The tattooed and non-tattooed areas of skin began to sweat at the same time, which suggests that nerve signals to sweat glands were functioning correctly.

The study found that the inked skin “has reduced sweat rates, and thus potential heat loss capacity, during [whole-body heating], compared to adjacent skin without tattoos.”

“These data suggest that tattooing functionally damages secretion mechanisms, affecting the reflex capacity of the gland to produce sweat, but does not appear to affect neural signaling to initiate sweating,” the authors of the study claim. “Decreased sweating could impact heat dissipation especially when tattooing covers a higher percentage of body surface area and could be considered a potential long-term clinical side effect of tattooing.”

“The primary new finding in the current study is that peripheral [hair follicle-containing] skin of the arm containing tattoos has reduced sweat rates, and thus potential heat loss capacity, during [whole-body heating] compared to adjacent skin without tattoos,” the researchers wrote. “These data indicate that the collateral effects of the tattooing process negatively impact eccrine sweat gland function and could be considered a potential long-term complication or side effect of this cosmetic procedure,” they added.

In 2017, Maurie Luetkemeier from Alma College in Michigan conducted a study to see if tattoos interfere with sweat glands. The study used the Macroduct Sweat Collection System, which uses a small electric current to induce sweating. The study found that the inked skin produced about 50% less sweat than tattoo-less skin.

The study also found that the inked skin was saltier than the clean skin, which suggested that the tattoo ink could be disrupting the function of the sweat glands.

Luetkemeier cautioned, “The process we used for stimulating sweat glands differs from the normal process, which involves cooling yourself following a rise in body temperature.”

The researchers in the new study said, “Combined with previous studies, which also suggested potential functional damage of the eccrine sweat gland duct, there appears to be long-term consequences of the tattooing process that have not previously been considered.”

Dr. Michele Green, a dermatologist at Lenox Hill Hospital in New York City, noted that the decline in sweating “may have important ramification when patients have fever or illness or are overheated and may have problems with thermoregulation.”

Green added that tattoos could also raise the probability of skin infections and granulomas, a rash of red bumps.

These potential issues are something to consider when you go to get your torso tattooed with a Kanye West tweet.