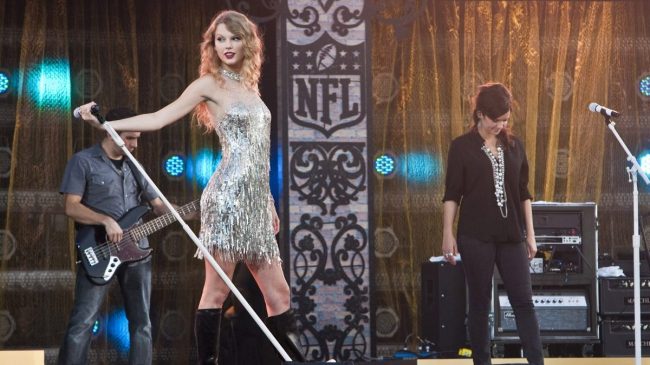 Taylor Swift may well be the biggest star in the music industry.

Billboard named Swift its Pop Star of the Year in 2021 after she had three chart-topping albums with Evermore, Fearless (Taylor’s Version) and Red (Taylor’s Version). Evermore was also a 2022 Grammy nominee for album of the year.

Swift is also one of the most-streamed artists of all-time on both Apple Music and Spotify.

Now the polarizing pop star could be set to play on the country’s biggest stage: the Super Bowl halftime show.

Pepsi had been the official sponsor of the NFL halftime show for the past 10 years. But soft drink giant opted not to renew its 10-year contract at the end of the 2021-22 NFL season.

The league finally revealed its new partner on Thursday night, announcing that it had agreed to a gargantuan deal with Apple Music.

The deal is reportedly worth an eye-water $50 million a year over five years.

But the big Easter egg in all this is when the deal was announced, which was at midnight. That has Taylor Swift fans theorizing that the star is set to be the main attraction of the Super Bowl 57 show according to TMZ.

The league curiously dropped the news at midnight — something that’s been associated with Swift for YEARS. She’s put out albums twice since 2020 that were released at that time, and she’s sung the word “midnight” hundreds of times in her tracks.
Swift is also set to release a new album next month … titled “Midnights.”
Taylor has never done an SB show before — with many believing she wouldn’t take the gig due to being locked in a sponsorship deal with Pepsi’s biggest competitor, Coca-Cola.

Obviously, with Pepsi out of the way that eliminates one major hurdle for Swift.

Swifties are all-in on the theory.

me opening my phone to find out taylor swift is doing the halftime show pic.twitter.com/KRKU5RJok7

And Variety is now reporting that they may be correct.

Never in our wildest dreams did we imagine Taylor Swift would play the halftime show. But now we know all too well that it appears to be true.