Ted Cruz Left His Dog At Home, But The Real Villain Is The Journalist Who Ratted On Him 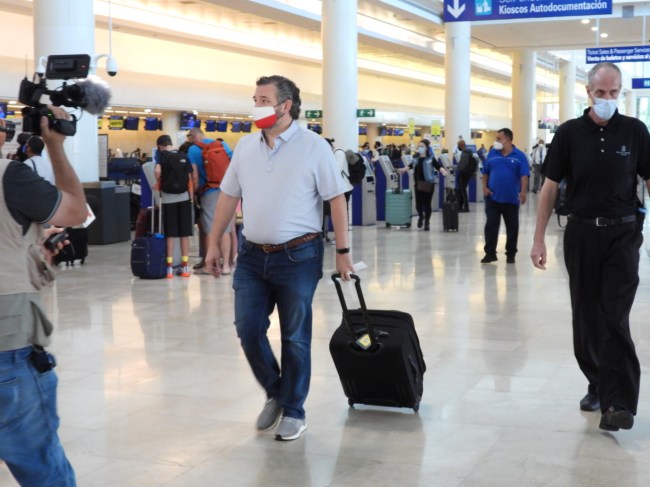 A Houston journalist named Michael Hardy jumped into the Ted Cruz pile-on yesterday when he tweeted the following:

Just drove by Ted Cruz’s house in Houston. His lights are off but a neighbor told me the block got its power back last night. Also, Ted appears to have left behind the family poodle. pic.twitter.com/TmLyGQkASy

Of course the tweet exploded. Any time you mix up maligned politician + spring break destination + fluffy dog in one tweet, it’s going to do numbers. Hell, look at this doozy I fired off just last week:

Hardy went on to flesh out that tweet in a piece for NY Mag. And I have to say, it’s one of the most preposterous articles I’ve read in a long time.

First, Ted Cruz is the easiest pickins in the league right now. The guy traded the frozen pipes of Texas for the salted rims of frozen margaritas. He did what anyone with the means would have done in that situation: “This sucks, I can afford it, we’re leaving.” Except here in America, we expect our elected officials to suffer alongside us. Hypocrisy is the badge that politicians wear under their shirts. Ted, did you learn nothing from Nancy Pelosi’s haircut? From Gavin Newsom’s dinner at French Laundry? Al Gore’s heating bills? If you’re going to take a family vacation to Mexico, it had better be to escape the concrete-melting heat of summer. And fly private next time. Surely, you have a friend with a plane.

In his article, Hardy claims that he went to Cruz’s home to check on the power situation. Cruz had said they left because they lost power, and the writer verified this claim before making a startling discovery:

The senator’s story appeared to check out. But then I heard barking and noticed a small, white dog looking out the bottom right pane of glass in the senator’s front door. Had Cruz left his dog behind?

As I approached to knock, a man stepped out of the Suburban parked in Cruz’s driveway. “Is this Senator Cruz’s house?” I asked. He said it was, that Cruz wasn’t home, and identified himself as a security guard. When asked who was taking care of the dog, the guard volunteered that he was. Reassured of the dog’s well-being, I returned to my car. Before leaving, though, I took a photo of the house from my car window, making sure not to include the house address.

So Hardy learns that the security guard is taking care of the dog. He is “reassured of the dog’s well-being.” THEN he takes a picture of the forlorn pooch staring out the door. THEN he tweets “Ted appears to have left behind the family poodle.” And, to his surprise, all hell breaks loose:

As soon as I posted the photo on Twitter, noting that Cruz “appears to have left behind the family poodle,” all hell broke loose. “Tell me they really didn’t leave that dog home alone,” one person replied. “That pooch deserves better,” grumbled another. People tagged the ASPCA and PETA. Then there were what I have come to call the Poodle Truthers. “Where’s the snow and ice?” “I don’t think this is really @tedcruz house, where’s the snow?” I tried to explain that after two sunny, 40-degree days, the snow and ice had melted, but some continued to insist the photo was fake.

For most, though, especially Texans like me who have suffered through a week without heat or water in freezing overnight weather, the notion of Cruz leaving his dog behind to hit the beach was all too much — especially the thought of the power being out when they left.

Michael Hardy, I don’t usually do this, but you’re a joke. You remind me of my sister when she was 12 and I was 10. We’d be sitting in the back seat of the family van on a long road trip when she would poke me, I would explode, and my parents would look in the mirror to see her raising her hands and saying “I don’t know what happened! He just flipped out!”

YOU DID THIS. YOU PUSHED THE BOULDER OFF THE PRECIPICE, CREATING AN AVALANCHE OF ANIMAL ABUSE CLAIMS, POWER-OUTAGE CONSPIRACY THEORIES, AND INTERNET RAGE. YOU PUT OUT THE BAT SIGNAL FOR PITA! YOU ARE STANDING OVER THE POT, HOLDING THE LADLE, AND WONDERING… WHO STIRRED THE POT?!

It was you, Michael. It was always you.

Hardy would probably tell me that he immediately added the following disclaimer tweet:

Just to clarify, this was taken around 1pm central on Thursday. It's possible Ted brought the poodle back from Cancun with him, or that a family member was staying behind to take care of the dog.

But we all know that nobody cares about the second tweet. If you really cared about integrity in your reporting, you would have included parts of that in the first tweet. Or you wouldn’t have tweeted it at all. “Ted appears to have left the poodle behind” is not bringing America back together. You’re not healing the wounds, pal. I see through you, Michael, the same way that people claim they can see through me because my skin is so pale as to to be translucent. To which I always say, “YOU MEAN TRANSPARENT. TRANSLUCENT ALLOWS LIGHT, BUT NOT SHAPES, TO PASS THROUGH.”

FWIW, I don’t like Ted Cruz. The guy is a joke. But that’s not what this is about. This is about that dumb dog, who is clearly not in trouble whatsoever. We’re talking about a poodle, not a labrador or a golden or some adorable breed that actually deserves our concern. Poodles are the cats of dogs.

And Michael Hardy is the poodle of reporters.