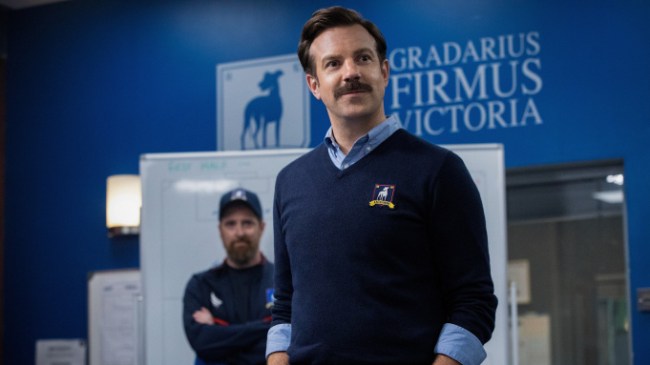 Despite being very much a “soccer guy” — i.e. I grew up playing it and currently have an active interest in the game (up the Reds) — I was considerably late to the Ted Lasso phenomenon.

Every so often, when I’m extremely wrong about the potential of an upcoming Hollywood project, I actually remember my thoughts when first seeing the trailer for whatever the project was. For example, back during my senior year of college, I saw a trailer for a Keanu Reeves-starring action movie from a director I’d never heard of. At this point, Reeves hadn’t had a true hit since the third Matrix movie, so I remember simply asking myself: “who asked for this?”. That movie was John Wick, which has seen spawned one of the *truly great* action movie franchises of all-time. Whoops.

The same can be said about Ted Lasso. Maybe it was my self-proclaimed soccer guyness that caused me to look down upon it, wondering how they planned on turning an entertaining but shallow promotional bit from five years ago into a full-fledged comedy series. Not only had Sudeikis’ star faded since the mid-2010s, but the series was stashed away on Peacock. “How good could it be?” I wondered. Once again, as the late, great Charlie Murphy once said, I was WRONG:

Now here we are six months after the series released and it’s already been renewed through season three, while Jason Sudeikis is racking in awards for his portrayal of the big-hearted football manager (and life coach). And rightfully so, as its Sudeikis’ ability to imbue Lasso with genuine, unrelenting kindness that’s made the series such a success.

RELATED: Let This Be YOUR Sign To Finally Watch ‘Ted Lasso’ (Yes, You!)

Lasso, as Sudeikis tells it, is based on tons of famous coaches, mentioning the likes of John Wooden, Roy Williams, Bill Self, Pete Carroll, Steve Kerr, and Jürgen Klopp (even Coach Taylor from Friday Night Lights) when asked about his inspiration. But there’s another person the beloved biscuit baker is based on, and that’s Sudeikis’ high school basketball coach Donnie Campbell.

When Donnie Campbell coached high school basketball, he began every practice with a quote. He pulled the words from a small quote book in his office desk at Shawnee Mission West High School, stuck them on a bulletin board, then asked his players to memorize the message. On most days, he quoted John Wooden.

Campbell was a young coach then, barely 30, and if he’s being honest, maybe he was learning, too. Thousands of high school coaches have quoted Wooden in gymnasiums across America. Thousands more have taught enthusiasm and industriousness and the Pyramid of Success. Campbell was no different, of course, no different than any other well-meaning coach trying to reach young kids, except for one point guard who happened to listen: Jason Sudeikis, the future creator and star of “Ted Lasso,” a television show about what it means to coach.

Campbell could also be a character. A little folksy. The kind of coach who sounded like he grew up in rural Kansas. If a player looked too relaxed at practice, he’d offer a coke or a bag of chips. In the days before big games, he reminded players to get enough sleep: “He would tell us: ‘You can’t hoot with the owls at night and fly with the eagles in the morning,’ ” said Matt Kleinmann, who played for Campbell at Blue Valley West in the 2000s.

“I’d bring in a laminated poster, like a freaking PE teacher and with a dry-erase marker,” Sudeikis told Wahl, “and just kind of go through why this matters.” [via The Athletic]

Similar to the series itself, The Athletic‘s entire piece on Sudeikis and Campbell is incredibly well-made and heartwarming, so check that out if you’ve got the time. And keep an eye out for season two of Ted Lasso, which began production in January, meaning it *could* release later this year.