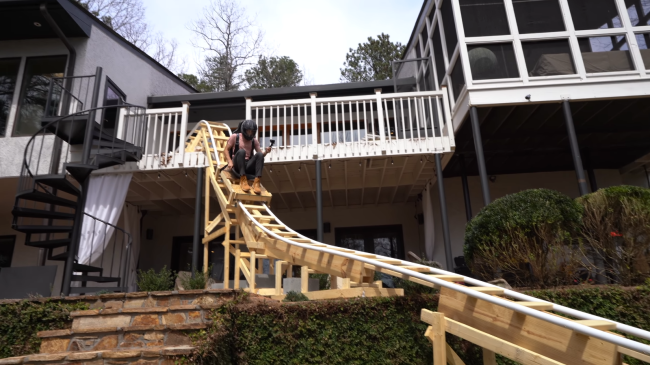 Building the coaster out of two-by-fours, PVC pipe, cinder blocks and sandbags, including designing and building the car, took him a little over three weeks to complete.

“It’s on casters and we’ve got three sets of four wheels. Four go on here, another four are on the side, and another four underneath,” Tolliday told WSB-TV News.

His creation even got the attention of the local news, as well as ESPN’s SportsCenter who reached out to him on social media.

Of course, when all the work was done, he had to be the first one to take it for a ride.

“I was absolutely terrified. But I guess because I built it, I knew how sturdy it was. So, I was pretty confident I’d be okay, but I was screaming my head off. It was crazy,” said Tolliday.

Tolliday’s mom Katherine also took a ride on her son’s coaster, and she liked it, but says she’ll be glad when it’s gone and her home can go back to normal.

“I’m looking forward to getting my yard back. I’ve got some plants trying to grow underneath. Yes, this is not going to be a permanent fixture in my yard, I can tell you that,” she said.

Tolliday says building things such as this backyard roller coaster is just something he likes to do and hopes to keep doing in the future.

“That would be my dream job, to build stuff like this for people and then see their reaction when they go down it for the first time,” he said. “Yeah, I had so much fun building it.”