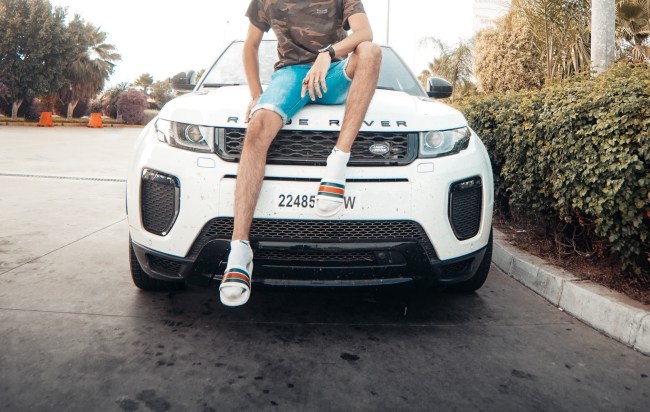 A teenager in Arizona was forced to give away all his possessions after his parents found out he took their car without permission and went on a joyride.

Mom and dad were in Las Vegas celebrating their anniversary and received a call from Phoenix Police. The couple’s Range Rover was spotted speeding around the neighborhood.

“I just wanted to drive but I don’t have a license so I just took it,” 14-year-old Angel Martinez told Fox10. “I can wash the car, and I was like I don’t have anything to dry it, so I’m gonna take it for one spin until it dries.”

This apparently isn’t the first time Angel has been in trouble, which tends to happen when your parents are dumb enough to leave you unsupervised while they party in a different state, so the best form of punishment was to make the teen give away all his stuff.

For hours, Angel sat on his bed with a sign that reads: “Sorry I stole my parent’s car and was speeding.” Clothes, television, and the bedroom set were given away for free. Angel’s belongings went as fast as the range rover he was driving.

Angel’s dad, Ramon, said the punishment was also meant to be an apology to neighbors. “We’re neighbors as well. He could’ve run someone over. Something really bad could’ve happened.”

It's safe to say 14-year-old Angel Martinez will not forget about the lessons he learned anytime soon.​ https://t.co/mbiQySd4FF

“He’ll be sleeping on the floor, or maybe the couch for the foreseeable future, it’s a lesson learned,” Ramon commented.

If my son ever takes my car without permission at the age of 14, drives without a license, and gets caught speeding, there will surely be hell to pay. The hell won’t include forcing him to give away all his possessions.

I’m the only person who suffers in that situation. Based on the photos, this kid will need everything replaced which includes basic necessities like a bed, dressers, clothes, and shoes.  He can’t sleep on the couch forever and can’t wear the same clothes every day.

And as far as apologizing to neighbors, whatever happened to good old manual labor? Make the kid cut some grass, wash some cars, and keep the street clean. He can start by hauling all that shit off the front lawn and back into the house.