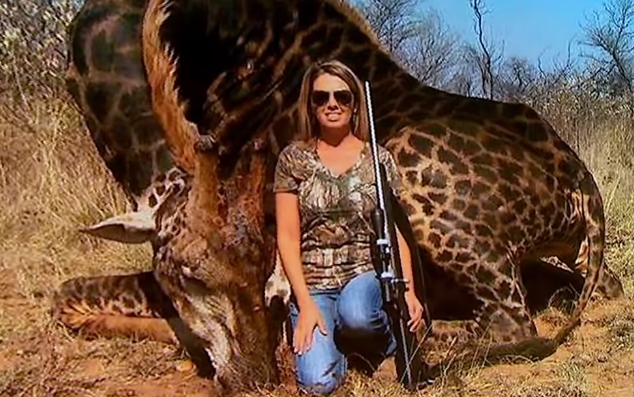 A hunter who went viral in a photo for killing a rare giraffe has not only defended her actions, but doubled down on killing the animal by saying that the animal was “delicious.”

American trophy hunter Tess Thompson Talley went viral in 2018 for posting a photo of a dead rare black giraffe that she killed on a hunting trip in South Africa in 2017. Talley said the rare black giraffe was more than 18-years-old and weighed over 4,000 pounds when she shot and killed the animal.

Talley, who is from Kentucky, defended her actions by calling the trip a “conservation hunt” that was designed to manage area wildlife. Most of the reactions to the controversial and photo were negative as people were outraged that she would murder such a majestic and rare creature. The since-deleted Facebook post was captioned: “Prayers for my once in a lifetime dream hunt came true today! Spotted this rare black giraffe bull and stalked him for quite a while. I knew it was the one.”

In a new interview with CBS News, Talley defended her actions. “It’s a hobby, it’s something that I love to do,” the big-game hunter told CBS News’s Adam Yamaguchi. “I am proud to hunt, and I am proud of that giraffe.”

Despite widespread criticism, Talley argues that killing the giraffe allowed her to made decorative pillows and a gun case. The hunter also said that she ate the giraffe and it was “delicious.” “Not only was he beautiful and majestic, but he was good,” she said. Adding that she “was blessed to be able to get 2,000 pounds of meat from him.”

Talley said she does not kill animals just for the thrill of hunting, but it is about “conservation.” “Everybody thinks that the easiest part is pulling the trigger. And it’s not,” Talley said in the CBS News interview. “That’s the hardest part. But you gain so much respect and so much appreciation for that animal because you know what that animal is going through. They are put here for us. We harvest them, we eat them.”

When asked why she just doesn’t help the conservation of animals by donating to wildlife charities, Talley responded that she “would rather do what I love to do, rather than just give a lump sum of cash somewhere and not know particularly where that is going.”

Talley recounted the backlash she received on social media from the photo. She explained how people tried to get her fired and even showed up at her job.

Talley said that the giraffe was not rare and the “breed is not rare in any way other than it was very old. Giraffes get darker with age.” She also said the 18-year-old giraffe was too old to breed.

“The giraffe I hunted was the South African sub-species of giraffe,” she said last July. “The numbers of this sub-species is actually increasing due, in part, to hunters and conservation efforts paid for in large part by big game hunting. The breed is not rare in any way other than it was very old. Giraffes get darker with age.”

The world’s giraffe population plummeted by nearly 40 percent between 1985 and 2016. There are now an estimated 97,000 of the long-necked mammals in the wild. In April, the U.S. Fish and Wildlife Service announced they were reviewing the giraffe as a potentially endangered animal. The Fish and Wildlife Service has up to 12 months to conduct research to decide if they should classify giraffes as an endangered species to help increase worldwide populations.

Trophy hunting, which is a $2 billion-per-year industry, is legal in many countries in Africa including South Africa, Namibia, Zambia and Zimbabwe.