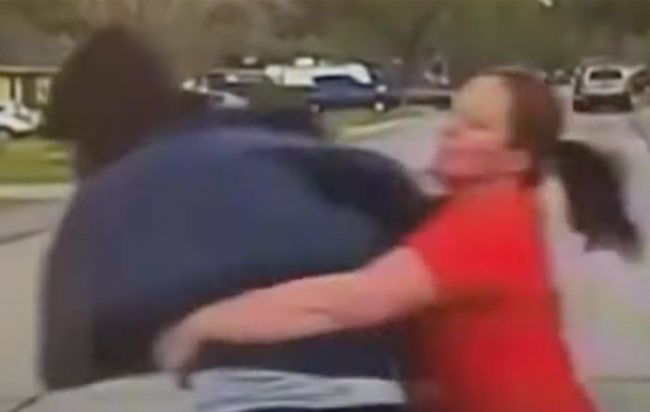 I assume plenty of people reading this are familiar with the concept of “Dad Strength,” a borderline superpower that many guys seem to be endowed with when they become a parent. However, this real-world equivalent of video game ability point isn’t just reserved for men, and if you need any proof, you don’t have to look any further than a video of a Texas woman showing off her Mom Strength that’s started to make the rounds.

Over the years, there have been plenty of stories concerning parents and children alike who’ve gone into Hulk Mode (a phenomenon also known as “hysterical strength“) in order to come to the aid of people who’ve found themselves in threatening situations, and according to KPRC, we can add a new example to the canon courtesy of Phyllis Pena.

The outlet obtained a video captured by a police car’s dashcam of an incident that unfolded in Lake Jackson early in the morning on January 31st, which is when Pena spotted a man peering into the window of her 15-year-old’s empty bedroom. The alleged Peeping Tom—identified as Zane Hawkins—fled the scene after realizing he’d been spotted, and while police tracked him down, he managed to escape custody.

Unfortunately for Hawkins, Pena was ready and waiting and ended up giving him the Terry Tate treatment after hitting him with a devastating truck stick and tackling him to the ground, where she and her daughter restrained him until officers arrived.

BOOM! SHE LAID HIM OUT! 💥pic.twitter.com/uo7QyPvpsr

The outlet spoke to Pena, who described what was going through her head at the time in addition to the praise she received from law enforcement in the aftermath:

“I figured the least I could do if I got him down, tripped him, whatever, then they’d have a chance to get caught up. The first instinct was to make sure he didn’t go any further.  My kids are my life and I was making sure I protect them.

The cop fist-bumped me and he was like, ‘Hey, so I heard the Texans are looking for a new linebacker.'”

In addition to being charged with evading and resisting arrest, Hawkins was also hit with possession of a controlled substance and could end up facing even more discipline once the investigation into the incident wraps up. Pena might not get a contract offer from the Texans, but I’m sure it’s only a matter of time until J.J. Watt sends something her way.