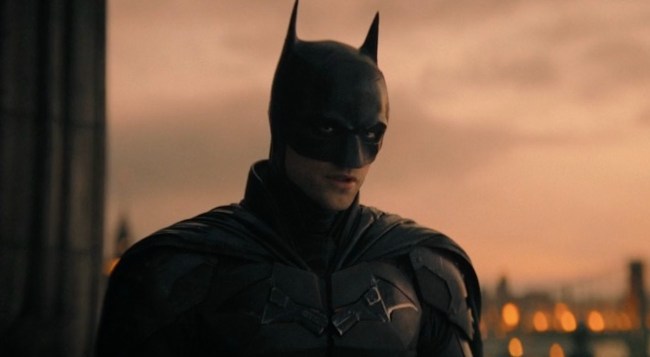 With just about three months to go until the release of The Batman, Warner Bros. has released another trailer for the highly-anticipated Matt Reeves’ directed reboot, and fans of the Dark Knight are losing their minds over how epic the film looks.

The third major trailer for the film, this teaser — titled “The Bat and the Cat” — highlights how the film will showcase the relationship and partnership between Robert Pattinson’s Caped Crusader and Zoe Kravitz’s Catwoman, who will be teaming up to help protect Gotham City from Paul Dano’s utterly psychotic Riddler.

Despite the incredible legacy of Batman movies thus far, some fans are beginning to believe that The Batman has a chance to be *the* definitive cinematic take on the character, as the film seems to be leaning all the way into the darkest aspects of the legendary crime fighter. Batman fans are also drawing connections to the brutality of the beloved Arkham games from a few years ago, which many consider to be one of the greatest Batman stories ever told, regardless of medium.

the people who thought Robert Pattinson wasn't going to be a good Batman after seeing that new trailer#TheBatman pic.twitter.com/UJDSCh7gUe

Matt Reeves every time he drops a new trailer for #TheBatman pic.twitter.com/XHx8jIxgCr

all the people that thought Robert Pattinson wouldn't be a good Batman right now#TheBatman pic.twitter.com/P7vNJzqMw4

The new trailer for #TheBatman is just incredible.

Requesting March 4 off as we speak #TheBatman https://t.co/8ZkttOs7aJ

Every few years, you get a comic book film that is genuinely cinema. A film that transcends its own medium and leaves a mark.

With @mattreevesLA’s vision and an incredible cast led by Robert Pattinson and Zoë Kravitz, #TheBATMAN might just be one of those films.

The new #TheBatman trailer is amazing! It reveals few more interesting sub-plots. Very intriguing. Still not revealing too much from the film which I appreciate considering it's a mystery movie. Also more stunning cinematography and lighting. pic.twitter.com/JrGPhuMpIE

This is going to be Cinema. Save this tweet #TheBatman pic.twitter.com/u8pb21fMC4

HOW THE HELL DOES THE BATMAN HAVE THE THREE GREATEST CBM TRAILERS EVER???? #TheBatman pic.twitter.com/Ij1U15bMvS