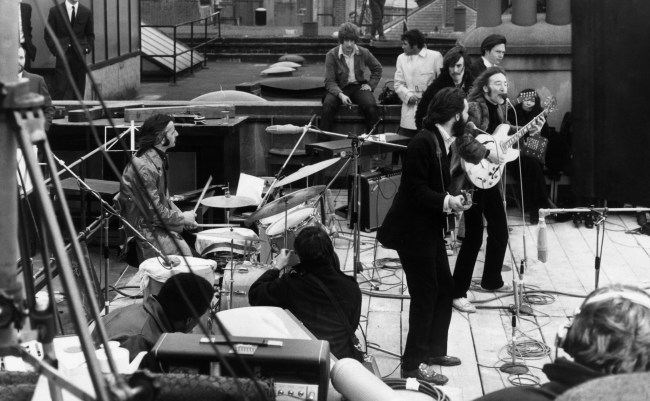 Chalk up another absolutely preposterous flex from Disney+: according to an exclusive report from Vanity Fair, the upcoming Peter Jackson-directed Beatles documentary — The Beatles: Get Back — will feature the iconic band’s final live performance. Not only that, but the footage of the performance was taken from “at least 9 different cameras and has then been scrubbed to astonishing clarity, detail, and color.”

It’s the Beatles as none would ever see or hear them again—their last live performance as a group, January 30, 1969. It’s also the Beatles as none of us, 52 years on, has ever seen them. The approximately 43-minute sequence from director Peter Jackson’s forthcoming documentary, The Beatles: Get Back, shows the full, uninterrupted concert on the roof of 3 Savile Row, the band’s headquarters, including iconic performances that would appear on their last album, Let It Be. [via Vanity Fair]

Furthermore, The Beatles: Get Back, which was previously teased as a film, will now be a docuseries and will release on November 25, 26, and 27.

The Beatles: Get Back will be the second documentary released by the Lord of the Rings filmmaker since 2018, as he previously directed the World War One doc They Shall Not Grow Old. As for feature films, Jackson most recently directed 2014’s The Hobbit: The Battle of the Five Armies.

RELATED: Director Peter Jackson Released This Never-Before-Seen Footage Of The Beatles Having Fun In The Studio