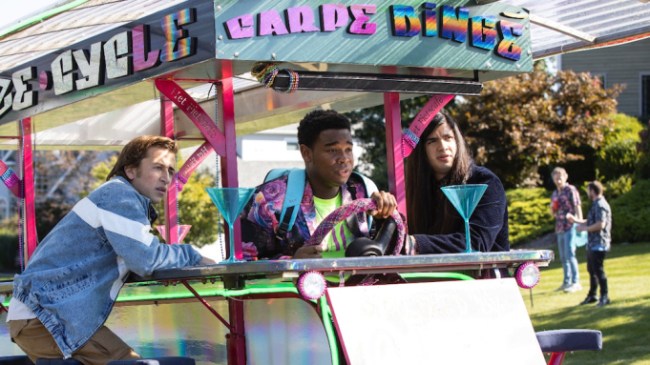 A couple years ago, comedian/screenwriter Jordan VanDina started e-mailing me about his screenplays. He was looking to get them in front of a bigger audience by featuring them here on BroBible.

These weren’t just ideas for projects (…we get pitched ideas all the time); They were feature-length screenplays, hammered out in Final Draft with ridiculous dialogue, subplots, and foils.

Knowing fully well that they didn’t stand a snowballs chance in hell of being bought or made by any major studio, the scripts lived on his comedy website, Weekend Scripts. Part satire, part pop culture absurdism, the concepts were a type of gonzo fan fiction that blatantly mocks how the world and the entertainment industry operates.

Here’s a couple that made me laugh pretty hard, based on the premise alone:

Jordan emails me out of the blue, noting that one of his insane scripts has finally come life. It’s called The Binge – a Hulu Original Film starring Vince Vaughn.

It’s been a while. I used to write those fake scripts like the Guy Fieri one and Fast Nein. Anyway, I finally wrote something that could get made and it did! It’s called The Binge and it stars Vince Vaughn and premieres on Hulu next Friday. It’s like The Purge but with drugs and dick jokes. It’s a real throwback to late 90’s/early 2000’s comedies. Anyway it feels made for the BroBible audience so I figured I’d send it your way. The trailer came out yesterday, check it out if you get a chance! Either way, I’m still reading the site constantly. Hope you’re doing good.

Let me tell you what, that e-mail brought a smile to my face. There’s nothing better than hearing about someone achieving their dream after years of grinding and putting in the work, one dick joke at a time.

I’m instantly sold. The Purge, except as a party comedy where all intoxicating substances are legal for one night?

The Binge is produced by American High, the production company founded by Jeremy Garelick (The Wedding Ringer, The Hangover, The Break-Up) in 2017 that specializes in a new era of “heartfelt teen comedies.” Garelick himself directs, giving it a flair of John Hughes in the ’80s with a National Lampoons-style hard-R twist.

The Binge hit Hulu this past weekend. It feels like an Old School-era Todd Phillips hard R comedy, except where the characters aren’t afraid to break out out in a song-and-dance routine a la Family Guy.

The Binge is officially streaming on Hulu right now! Since I was 6 years old I’ve said I wanted to write movies. And since I was 9 years old I said I wanted those movies to be filled front to back with dick jokes. I hope all of you drink some beers tonight & watch #TheBingeMovie pic.twitter.com/o9uQAQKxgh

The Binge is riding a unique cultural moment for hard R comedies. With movie theaters closed for the most part, straight-to-platform projects like Hulu’s Palm Springs and Netflix’s The Wrong Missy are able to find their audience at home.

The Binge is a classic “where’s the party at?” comedy a la American Pie, Project X, Superbad, Blockers, and Good Boys. It follows three high school buddies – Griffin, Hags, and Andrew – played by Skyler Gisondo, Dexter Darden, and Eduardo Franco. Much like the Jonah Hill and Michael Cera dynamic in Superbad, these three are looking to get after it and make some memories on the first night they can legally partake in The Binge. Except the school’s principal – a mustached Vince Vaughn – is adamant about keeping the group away from the partying associated with The Binge, as well as foiling the romance brewing between Griffin and his daughter Lena, played by Grace Van Dien.

If you’re looking to turn your brain off for some dumb escapism under 100 minutes, don’t miss it. It’s a movie that pairs well with edibles – the kind of stoner flick that critics and movie nerds love to hate, yet embraced by the masses who can take it at face value for a momentary laugh.

Y'all need to watch the binge. That shit was better than superbad

i’m watching this movie on hulu called the binge where basically all alcohol and drugs are illegal except for one day of the year but it’s a high school “i wanna take the girl to prom” movie too and it’s….a lot lmfao