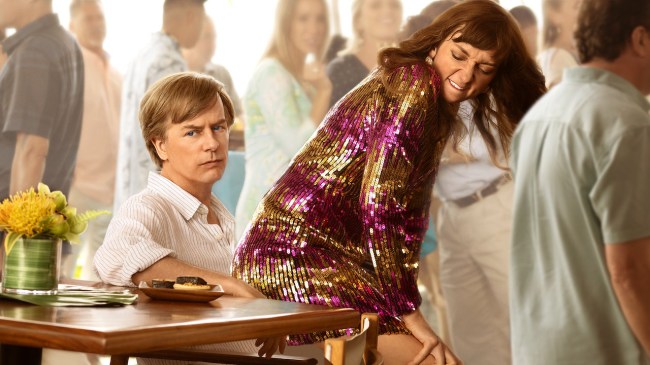 The older you get, the more nostalgic you get for the movies of your younger years.

Chalk my movie nostalgia up to aging – like how, in the ’90s, my dad preached the gospel of comedy classics like Caddyshack and Blues Brothers – movies that defined, for him, what it meant to be in your 20s in the early 1980s.

The more I get into my mid-30s, the more I miss the raucous and raunchy hard-R comedies that were mainstream during my coming-of-age, from 1999 – 2009. Movies that weren’t trying to do anything other than make you laugh: Quotable stoner comedies that you’d go see with your best buddies from on Friday night after ripping a joint of dime bag schwag in the parking lot: Jay and Silent Bob Strike Back, Pineapple Express, Grandma’s Boy, Old School, etc.

As the entertainment industry shifted focus to platforms like Netflix and Amazon, studios have been slow to green light the kind of outrageous comedy that flourished in the ’90s and 2000s.

There’s still plenty of money to be made in the genre (Good Boys grossed $110 million worldwide in 2019 and Blockers over $94 million in 2018), but the overall frequency of these projects is overall down compared to the clip they once were released at.

And, until recently, these projects barely had a home on streaming platforms.

It’s taken years of trial and error, but Netflix is finally figuring out its stride for formulaic, scripted comedies, packed with F-bombs, absurd characters, and innuendos.

And clear they have the audience demand data to back up investments in these movies.

The latter was just released on Netflix, part of the platform’s ongoing deal with Adam Sandler and his production house hit factory, Happy Madison. 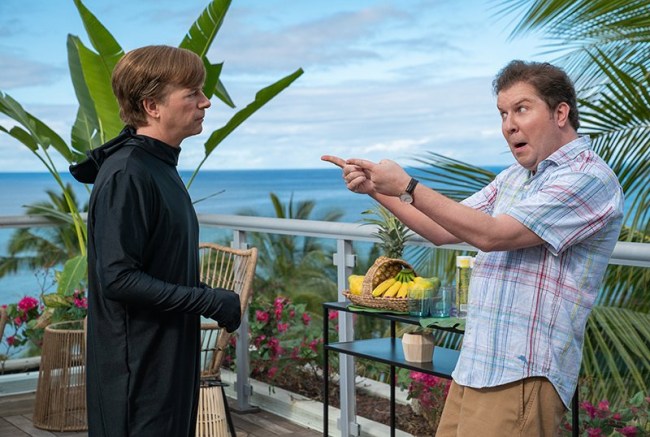 The Wrong Missy is a love story-slash-disaster movie directed by Tyler Spindel (writer, Father Of The Year), with a screenplay by Chris Pappas and Kevin Barnett.

It’s about as classic of a comedy as it gets.

David Spade plays a middle career corporate finance monkey named Tim Morris. His grandma sets him up with Missy – played by Lauren Lapkus after they met at an oil change. Sparks don’t exactly fly, with Morris doing everything humanly possible to escape from a nightmare date he’s found himself on.

Another Movie for Roman Reigns.

After shaking Missy, he meets the woman of his dreams, Melissa (Molly Sims), in passing at the airport. Melissa is everything Missy is not: A former D1 college athlete, a former Miss Maryland, divorced and hyper-focused on climbing the ladders of her career. They exchange digits after a steamy encounter in a janitor’s closet, promising to rendezvous soon.

After a couple of strategic “you up?” texts and below-the-waist pics, Morris invites Melissa to be his date at his corporate retreat in Hawaii, at the insistence of his best friend / company HR manager, Nate, played by Nick Swardson. Nate’s the kind of friend we all have – ready to party yet always rooting for you. The kind of guy who knows all your passwords and reads all your texts to second guess you. The kind of guy who says things like…

Make some noise you corporate sl*ts!

…Without anyone batting an eye.

Without giving up too much, I’ll offer is this: The wrong Missy ends up accompanying Morris on the retreat, much to his horror. She’s crazy, erratic, and clingy, with an exhausting appetite for booze and shenanigans.

Not exactly someone you’d bring home to mom.

At this point, it has all the hallmarks of an Adam Sandler hangout movie, complete with a complicated relationship foil and many wonderful Rob Schneider moments.

The Wrong Missy feels like a comedy straight from the playbook of bygone era, when David Spade and Sandler both cut their teeth with wacky antics on screen. There are many “wait, did she really say that?” moments where Lapkus shines.

Slaying sacred cows in comedy, of course, doesn’t exactly mean it will be widely loved. In fact, one reviewer for a parenting movie review site claimed he’s “going to have to go pour some bleach onto my retinas and see if that can get this movie out of my head.”

And that’s exactly what makes The Wrong Missy so much fun.

There’s no white-knighting or preachy moral aggrandizing, sans a simple reminder to be the best version of ourselves in the digital age. Just watch who you’re sending those text messages to and follow the Golden Rule.

It’s easy to go into The Wrong Missy expecting it to be bad simply because it’s unhinged and vulgar in an media landscape that’s increasingly straightedge.

Like the reviewer above, many will cringe at this movie.

But, personally, I think Netflix’s return to the genre is a breath of fresh air for those of us who grew up on a balanced comedy diet of Bill Murray, Chris Farley, and American Pie movies.

At the box office, hard R comedies produced strictly for an adult audience have traditionally had less ROI than a family movie or a superhero blockbuster. The investment in these project has dwindled significantly over the years, with Judd Apatow explaining to Vulture a few years ago about how the writers strike in 2008 caused a decade-long decline in the genre:

After the last writers’ strike, it felt like the studios decided not to develop movies. They used to buy a lot of scripts, and they had big teams of people giving notes, and they worked for years with people in collaboration on those scripts. I feel like the studios don’t buy as many scripts now. It used to be you’d open up Variety, and you’d see a movie studio had just bought a big high-concept comedy. Now it seems like they’d rather things come in packaged: a script, a cast, a director. As a result, a lot of great comedy writers are going to television instead of sitting at home and trying to write a script for a film, write the way I was.

There’s also the universal marketability of a comedy to audiences outside the English-speaking world: Comedy is relative to its audience and what gets a laugh from an American audience might bomb big time to an audience in China or Mexico. Films like Deadpool, with underlying comic book themes and VFX sequences, take priority in the heap over a clever buddy comedy script that could go on to be the next Wedding Crashers or Forgetting Sarah Marshall.

Despite raunchy comedy having an audience at large in the culture (…just look at the careers of stand-up comedians like Tom Segura, Chris D’Elia, and dozens of other comedians with specials on Netflix), scripted comedies almost always get trashed by the entertainment press, which doesn’t exactly help a movie reach its intended audience.

It’s an extra fickle, extra sensitive media world. Reception to vulgar comedies almost always gets hammered for not being smart enough or being “too lowbrow” for a critic instead of being celebrated for cathartic escapism. 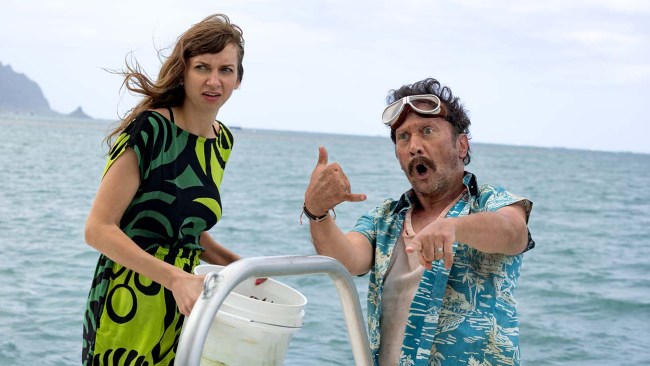 That’s a bummer. If laughter is truly the best medicine, whose to judge what is and isn’t deserving of that laugh?

Plenty of us don’t need a comedy to be smart or clever in order to laugh at it. We just need it to be funny. And I’m not one to judge the many factors that go into how a movie arrives at being funny, as long as it makes me laugh.

Look: The Wrong Missy and its like isn’t going to win any awards. It’s not high art.

But it’s proof that sometimes being dumb is actually very smart.

As weird and heavy as day-to-day life is right now, I hope we see more oddball comedy projects like The Wrong Missy in the future.

If it cheers you up after a lousy day, it served its purpose in the world.