‘The Boys’ Creator Says That “Girl Power” Scene Was A Direct Shot At ‘Avengers: Endgame’ 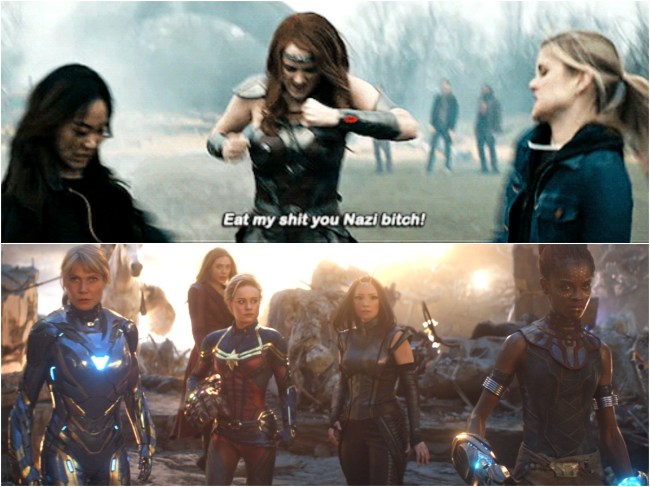 Not to toot my own horn, but I absolutely NAILED this one, as I expressed this exact sentiment while reviewing season two of The Boys on this week’s Post-Credit Podcast.

“I’d love to see more of that “Girl Power” team-up. I mean, it’s a show called The Boys, but that one scene where Maeve, Starlight, and Kimiko all kick the shit out of Stormfront was one of the more exciting moments of the season, if not the entire series,” I said.

“And I think that because of the voice that this show has honed — alright, ready, and this is somewhat hot-takey, but the sort of “girl power” team-up in the Avengers: Endgame third-act battle scene comes off as disingenuous. They totally have the heroes to pull it off, and it took them years of work to get to that stage, so all the credit in the world to them — but that specific moment was clearly engineered for the “rah rah!”-ness of it. And it was cheap to me.”

“THIS version, of the three of them ganging up to beat the hell out of this Nazi, felt organic, it felt legitimate, it felt earned, and it was thrilling. We know The Boys isn’t going to give us some corny shit for corny shit sake. So, I’d like them to use that trust to give us more of those scenes that other superhero franchises have failed, despite awkwardly trying, to deliver.”

Lo and behold, just a day later in an interview with The Hollywood Reporter, showrunner Eric Kripke and Producer Rebecca Sonneshine revealed that very scene was making fun of that A-Force moment in Avengers: Endgame.

“As for ‘girls get it done,’ a lot of that came from our executive producer, Rebecca Sonneshine, who came in after the weekend Endgame opened. She was just furious. I saw it, too, and I was like, “That was the dumbest, most contrived—” And she’s like, ‘Don’t get me started,'” Kripke said.

“She found it condescending and I agreed. So that just created for us a target, a satirical target. When there’s something really ridiculous in either superhero or celebrity or Hollywood culture, we’ll immediately go after it. It’s an easy shot.” [via The Hollywood Reporter]

Credit to the team over at The Boys, as they were not only able to subvert that cringe-worthy moment from Avengers: Endgame, but they were able to do so in a way that was simultaneously entertaining and rewarding within the context of the series itself.