The Boys Of 98′: How A Brotherhood Founded On TikTok Pivoted To YouTube And Is Seeing Explosive Growth 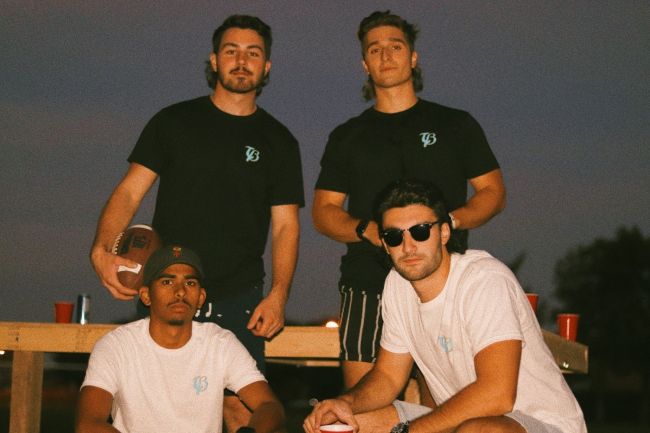 We sat down with Matt Cianci and Christian Camarata, two members of The Boys of 98′, to hear how their channel came together and what it was like reaching out to celebrity influencers in LA. Plus, we hear what’s next for The Boys of 98′ and their content.

The Boys of 98′ have managed to gain over 40,000 subscribers in just under a month and a half on YouTube. At the time of this interview, their channel sits at 91,000 subscribers, and their TikTok page at over 500k followers.

The Boys of 98 are a group of hometown friends who make daily vlogs and competition-based drinking videos.

To their fans, they’re known as “the drunk Dude Perfect” or “the result of Dude Perfect and Nelk having a baby together.” They all rock mullets and mustaches—some better than others—and yes, they all have their college degrees.

In a lot of ways, they’re the quintessential post-grad male friend group you return home to after all those years away. They’re the type of friend group we refer to as The Boys.

BroBible Interview with The Boys of 98′ 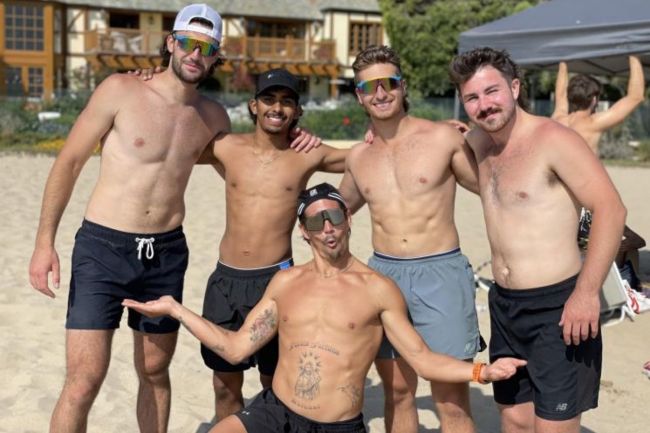 BroBible: Where are you guys at right now?

Matt: We’re still in LA, planning on going back to Canada at some point in August.

Let’s start with how the @Boysof98 TikTok was established.

Matt: We made our first TikTok on October 5th, 2019, and our first video was just Chip, another friend of ours, and myself.

Chip: It was at a grocery store near our college town and we were being dumb and making cringe jokes with items in our hands. Like I’d go up with peach and say, “You’re looking very peachy today.”

Matt: Yeah and that video got over 10k views in the first day, so we started making videos for fun while we were at school together.

Matt: By the spring of 2020 we were able to grow our page to around 50k followers, but then we began stalling. This was around the time the COVID lockdown in Canada happened and so Chip and I went back to our hometown.

Chip: I want to say May 20th, when we were all back home, Matt and I were like, “Let’s just do what we do with our friends and document it all.”

“Let’s just do what we do with our friends and document it all.”

Sports, drinking, partying, hanging out, all those things you do with the guys. And instead of trying to post three or four times a day, we focussed on one good daily video, you know? Planning them out and making sure we just captured our friendship.

So did Matt M. and Stefan join you guys at home during the Pandemic then? 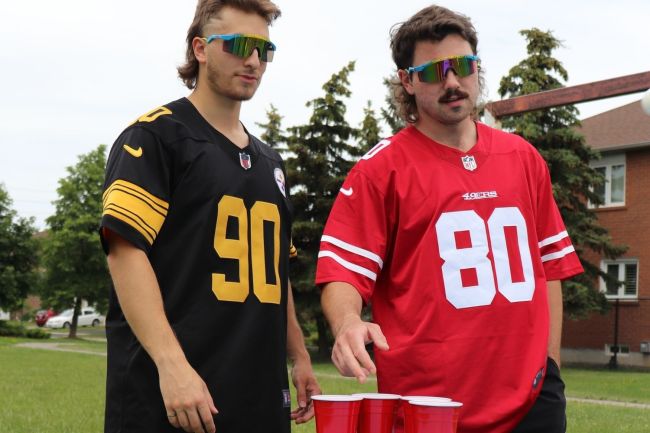 Matt: Yeah during the lockdown we were making videos with all of the guys in our neighborhood. The name Boys of 98′ really just stems from our hometown group of guys. Everyone has a friend group back home they call “The Boys.”

After we committed to posting once a day we said to our friends in our neighborhood, “Alright, who actually wants to do this? If you don’t want to it’s fine but we want to take it seriously.” And Macaroni and Stefan were in.

Chip: I remember that entire summer of 2020 our videos would get 10k views on them each week, then 50k, and then some over 100k. So by the end of summer, after we gained 300k followers on TikTok, we were like, “Let’s try to see if we can bring this traction over to YouTube,” because that’s essentially what the big creators do.

How to Play Golf ⛳️ or Drink 🍻

Matt: We love TikTok but it’s hard to monetize (one) and (two) it’s hard to keep your core audience. By that, I mean how you might see our videos while your scrolling, and you may like and even comment, but you’re most likely not going to click and visit our page. Going over to YouTube we could form a more direct audience and grow a fan base.

How would you describe The Boys of 98′? What are your videos like?

Chip: I think the best way to describe us is to look at our comments on YouTube. There was one that said, “These guys are like if Dude Perfect and Nelk had a kid.” I think that’s the best way to put it because we do challenges and create games for us to compete in, but Dude Perfect is more kid-friendly than we are.

Matt: We’re like a drunk version of Dude Perfect.

Chip: We also put the partying element in there so that’s why we get comparisons to Nelk, but we don’t do pranks like they do. 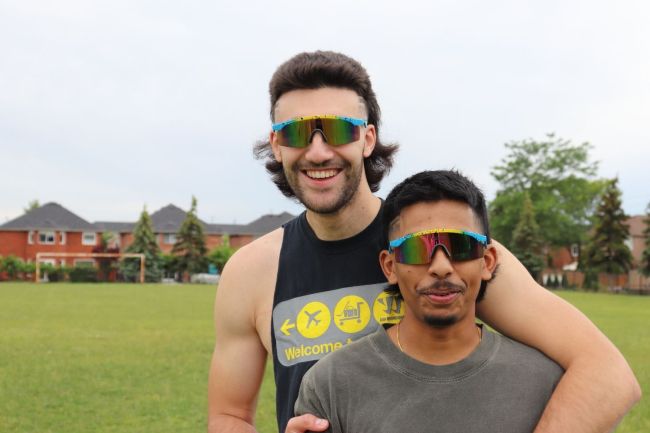 Can you tell me what inspired this trip to LA?

Matt: The main reason was to get out of Canada. We heard the U.S. was wide open so we planned the trip. The second reason was to collaborate. Our content doesn’t need features but it’s nice to bring new faces in and introduce new audiences to us and those we collab with.

Our first video in LA we went to Nelk’s headquarters to try their new Happy Dad seltzers. That video got some of our highest views ever at 250k. Then another video we just did was a beer Olympics with Bryce Hall and Griffin Johnson, which was super fun. We’ve got a few more videos planned here with other influencers that we’re excited about.

How did creators respond when you asked them to collaborate?

Chip: Us being smaller creators, it’s common for them to think “Who are these guys?” But when we explain what we do and what kind of videos we want to make they respect it. They obviously don’t know who we are but when they see us they’re like, “Oh these are The Boys, nice.” and they find what we do is pretty cool.

Matt: I think collaborating with us is also something they aren’t used to living in LA. People don’t normally invite you to come to a beer Olympics and get drunk at someone’s crib. It’s fun for them.

Chip: Full-time. Coming out to LA was a big step for us in committing to the channel. The 90k subscribers we have are pretty loyal, and we just want to keep making content for them. Considering the growth we had after one year, it’s motivating to go challenge ourselves for what we can do in our second.

Any unique plans in the near future with your channel?

Matt: We want to keep doing merch. That helps fund what we’re doing and we have fun designing stuff like our shades and shotgun tool. We’ve also got a road trip planned.

Chip: We just finalized sponsors and we’re doing 13 weeks at a different school each week during football season. We’ll start up in Michigan and Wisconsin and make our way all the way down to Florida and do like party ratings for each one.

I love it. A college road trip.

It’s been fun to watch your channel grow guys, thanks for the time.

Chip: Thanks once again!

You can check out The Boys of 98′ over on YouTube and on TikTok, and if you want to check out their merch you can do so here.