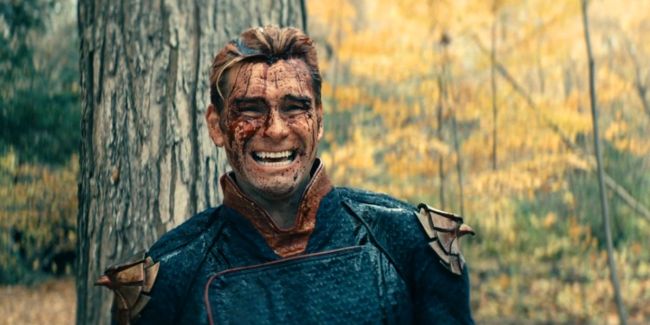 In a genre that’s becoming as increasingly repetitive as it is dominant, Amazon Prime Video’s The Boys genuinely stands out as something different among the seemingly endless stream of comic book projects.

In The Boys, while the superpowered people in the world have been marketed by the all-powerful Vought company as being the best among us, that lifetime of unchecked power has actually made them the worst, as the superheroes are effectively the villains of The Boys.

As a result, trying to take down what amounts to a superhuman gang of unhinged, nearly unstoppable psychopaths often results in tons of bloodshed, another of the series’ defining features. And according to Laz Alonso, who stars as Mother’s Milk on The Boys, we ain’t seen nothin’ yet when it comes to gore as season three will be “three times” bloodier than season two.

Now, to be clear, Alonso wasn’t speaking anecdotally, he was speaking literally, as he points out that they’ve already used “three and a half” gallons of blood while filming season three:

“I’ll put it to you this way. I was talking to the head makeup artist and she’s in charge of ordering the blood — that’s one of her many jobs. She told me that all of Season 2… When you talk about bulk, I don’t think they used over a gallon of blood in Season 2, believe it or not. Season 3, we’re already at three and a half gallons of blood. So that should give you a little indication of where it’s going.” [via Collider]

Part of the reason for that spike in gore is the inclusion of a “Herogasm” episode, which will be based on one of the most infamously raunchy storylines from the comics.

A six-issue spin-off of the main The Boys comic, “Herogasm” sees all of the Vought superheroes head to a corporate-sponsored remote getaway for a weekend of drug-and-sex-fueled debauchery, which is obviously derailed by Billy Butcher and the rest of The Boys.

There’s also the increasing insanity of Homelander to factor in, who was already having visions of horrific mass murder prior to the death of the mother of his child and his girlfriend in the season two finale.

RELATED: The Way S3 Of ‘The Boys’ Is Being Described By The Cast Is Extremely Promising (And Also Terrifying)