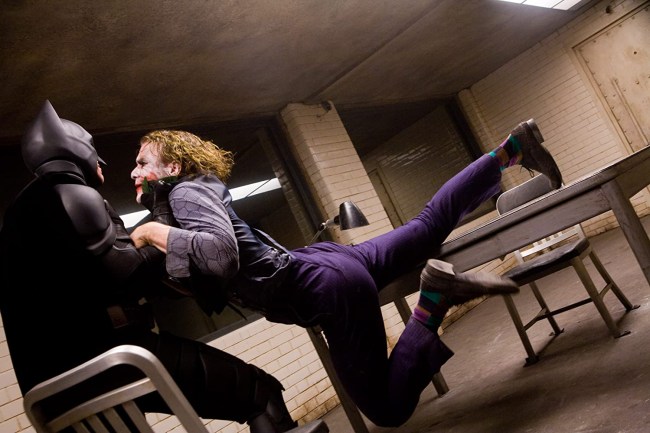 One of the silver-linings of our current predicament is the fact that both Batman Begins and The Dark Knight are on Netflix (not for long, though, as they’re leaving the service once March ends, so get those re-watches in now fam).

The Dark Knight is my second favorite movie of all-time (behind Eternal Sunshine of the Spotless Mind) and that largely has to do with Heath Ledger’s truly iconic portrayal of Joker. And when it comes to Joker scenes in The Dark Knight, there are none more defining than “The Interrogation Scene.”

Finally pitting the Caped Crusader and the Clown Prince of Crime against one another face-to-face, the interrogation scene provides insight into Joker’s mindsight, allowing audiences to realize that while he may be certifiably insane, he isn’t necessarily crazy: the ideas he’s mulling and acting on were legitimate then and remain poignant now.

In fact, his words seem to carry more weight now than ever before.

“Don’t talk like one of them, you’re not. Even if you’d like to be. To them, you’re a freak. Like me. They just need you right now. But as soon as they don’t they’ll cast you out. Like a leper,” Joker points out.

“Their morals, their code; it’s a bad joke. Dropped at the first sign of trouble. They’re only as good as the world allows them to be. You’ll see- I’ll show you. When the chips are down these, uh, civilized people? They’ll eat each other. See I’m not a monster, I’m just ahead of the curve.”

“Their morals, their code; it’s a bad joke. Dropped at the first sign of trouble. They’re only as good as the world allows them to be” — if those words don’t send a chill down your spine, especially when considering there’s a school of thought out there that wants to already re-open the economy — even if it costs human lives — then you’re part of the fucking problem.

Don’t abandon your morals just because you’re afraid. As Harvey Dent once promised, the night is darkest before the dawn, and the dawn is coming.