Warner Bros. Rumored To Be Considering A Live-Action ‘The Dark Knight Returns’ Movie 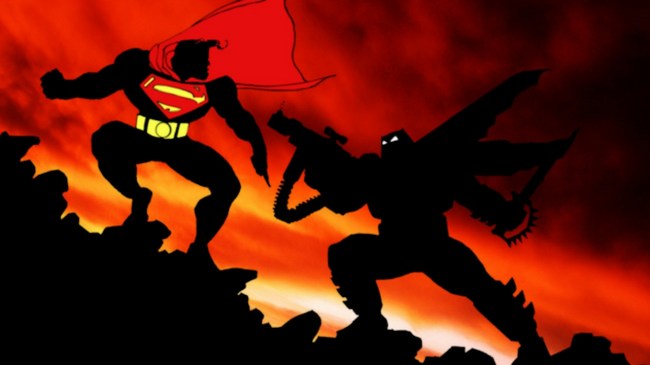 Folks, while I try not to be too hyperbolic (at least some of the time) in my articles, you’re going to have to take me at my word when I say this: The Dark Knight Returns *is* the greatest Batman story ever told (in my humble opinion — please be kind in your hate emails).

For the uninitiated, The Dark Knight Returns is a 1986 four-issue comic book written by Frank Miller than imagined a middle-aged Bruce Wayne coming out of a decade-long retirement to once again don the cape and cowl in a dystopian version of Gotham City.

Without getting into the thick of the plot details and spoiling it, the story sees the return of both Harvey Dent and the Joker, while also culminating with an epic, defining clash between the Dark Knight and the Man of Steel.

For the movie fans out there, this may all sound slightly familiar, as Zack Synder certainly took inspiration from the iconic graphic novel in his making of Batman v. Superman: Dawn of Justice.

But while Batman v. Superman certainly touched on elements from The Dark Knight Returns, it barely scratched the surface of its plot details and themes, as a true live-action adaption of the legendary Miller story would almost certainly be rated R.

And according to a recent rumor from We Got This Covered, Warner Bros. is potentially exploring that very idea.

According to our sources – the same ones who told us about the Green Lantern show before it was announced, and who told us The CW was doing an Arrow spinoff back in March – WB is considering adapting Frank Miller’s seminal graphic novel to the big screen. There’s already the two-part animated version, of course, but this would be a live-action theatrical feature. [via We Got This Covered]

While the story notes that Warner Bros. is merely exploring the idea of The Dark Knight Returns, it’s certainly exciting for fans as it gives us an idea of where the studio may head following the stunning success of Joker (Superman: Red Son, anyone?).

(And if you want to check out The Dark Knight Returns for yourself, you can cop there here.)