DiCaprio As Riddler And The Return Of Joker: What ‘The Dark Knight’ Sequel Was Going To Be Prior To Heath Ledger’s Passing 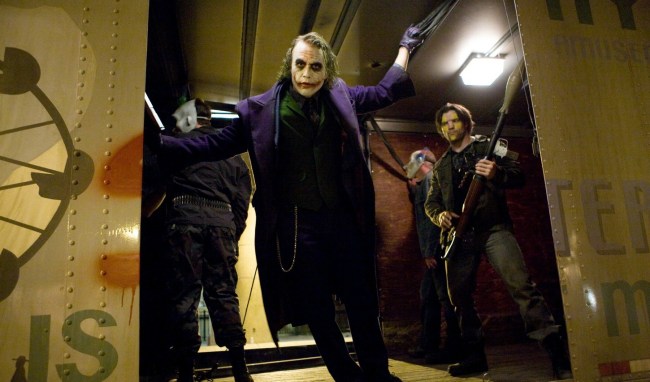 Perhaps the worst part of Heath Ledger’s passing — other than the loss of his life, of course — is that the 28-year-old was quite literally entering the prime of his career.

Following an Academy Award nomination for Best Supporting Actor for his performance in Brokeback Mountain, Ledger was cast by acclaimed director Christopher Nolan to fill Jack Nicholson’s clown shoes as Joker in the highly-anticipated follow-up to Batman Begins.

As the infamous story goes, the backlash to Ledger’s casting was immediate and resounding. Mind you, this is about 2007ish, so the likes of Twitter and Facebook are still a year or two away. And yet, fanboy culture was very still remarkably fervent, which just goes to show how truly riled up they were that they were able to create and generate a narrative without the use of social media.

Nevertheless, regardless of the fanboy tears pooling at their doorstep, Nolan and Warner Bros. forged forward with the still wildly young Ledger in the role. And the rest, as they say, is history.

On January 22, 2008, Ledger was found unconscious in the bed of his SoHo apartment by his housekeeper. His death was ruled an accidental overdose. Six months later, The Dark Knight hit theaters and effectively reshaped the movie industry in the process, and a year later, Ledger became the second performer to win a posthumous acting Oscar, as he took home the prize for Best Supporting Actor for his immediately iconic portrayal of the Clown Prince of Crime.

In the following years, Nolan had to be slowly but surely teased back into the fold to direct the third film, as he previously stated he would only return to the franchise if he felt he had a story worth telling. Coupled with the lingering pain of Ledger’s loss and you can understand Nolan’s desire to want to walk away.

But prior to Ledger’s death, Warner Bros. obviously knew what they had on their hands, as plans for the next film in the series were already underway.

As Ledger’s own mother tells it, she said she knew “he had plans for another Batman.” Anecdotes of family members aside, Ledger’s return to the franchise seemed likely on a ground level, as his ambiguous capture at the end of The Dark Knight quite clearly leaves the door open for his eventual return. With a character that transcendent, how could he not? In terms of basic movie-making and storytelling, Joker’s arc was not yet complete, all but guaranteeing his return.

The original plan, according to screenwriter David Goyer, was to have Batman ally with Harvey Dent in the eventual third film to put the Joker on trial, which would ultimately lead to the gruesome scarring of the Gotham City District Attorney. Obviously, those plans were eventually scrapped, as Dent’s transformation into Two-Face was completed during the events of The Dark Knight.

Then, there’s the big one: Leonardo DiCaprio’s casting as Edward Nygma, a.k.a. Riddler.

In an Empire Magazine feature that was released prior to the premiere of The Dark Knight Rises, Goyer said that the Warner Bros. big-wigs were already planning the sequel on the red carpet of The Dark Knight, specifically which villain they wanted to see.

“Goyer said that at the premiere of The Dark Knight, Warner Bros. executives were already talking about a villain forThe Dark Knight Rises — ‘it’s gonna be The Riddler, and we want it to be Leonardo DiCaprio…‘” [via Collider]

While we’ll never know if these two factors would have ever overlapped — Ledger’s return and DiCaprio’s casting — it’s safe to say if it did happen, it would have been an overwhelming success and possibly better than The Dark Knight itself. Sure, The Dark Knight Rises was okay — it does boast the franchise’s best fight sequences — but it still represents a low-point in the trilogy.

As for Ledger, we’re only tragically left wondering where his generational talent could have taken him, as he was not only still a young man —  to put it into perspective, Joaquin Phoenix is 45 and he’s still waiting on his first Academy Award — but one on the precipice of true greatness. And that will always be a tragedy, regardless of how long it’s been since his passing. Rest in peace, Heath.

On the 12th anniversary of Heath Ledger's passing, we remember the legendary interrogation scene from THE DARK KNIGHT.