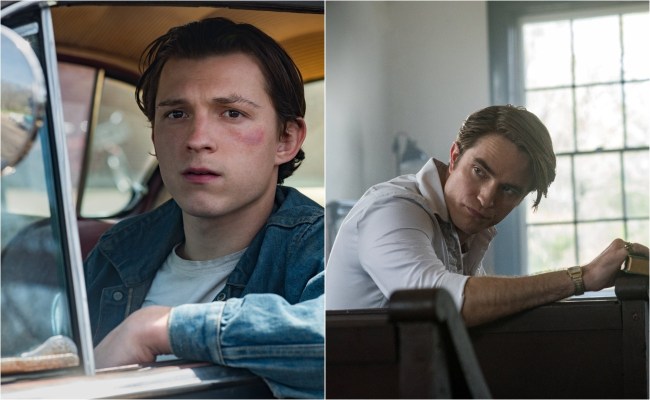 I am beyond gassed up for this one, my fellow movie-loving friends. In an admittedly brutal year for the film industry, a multi-decade-spanning gothic thriller starring the likes of Tom Holland, Robert Pattinson, Jason Clarke, Bill Skarsgard, and Sebastian Stan is about as good as it gets these days.

Sure, during a regular year, the release of The Devil All The Time — which, by the way, is one of the coolest titles I’ve ever heard — would still be a relatively big deal in the film industry. You’ve got Spider-Man and Batman starring in a Netflix thriller: pretty legit if you ask me.

But in this sort of year, the sort of year where the entertainment industry has been absolute flipped on its head and left out in the cold, the release of The Devil All The Time should be something that movie-lovers like you and I cherish because premieres like this are going to be few and far between for some time.

Here’s the official synopsis, via Netflix:

In Knockemstiff, Ohio and its neighboring backwoods, sinister characters — an unholy preacher (Robert Pattinson), twisted couple (Jason Clarke and Riley Keough), and crooked sheriff (Sebastian Stan) — converge around young Arvin Russell (Tom Holland) as he fights the evil forces that threaten him and his family. Spanning the time between World War II and the Vietnam war, director Antonio Campos’ THE DEVIL ALL THE TIME renders a seductive and horrific landscape that pits the just against the corrupted. Co-starring Bill Skarsgård, Mia Wasikowska, Harry Melling, Haley Bennett, and Pokey LaFarge, this suspenseful, finely-woven tale is adapted from Donald Ray Pollock’s award-winning novel.

Perhaps most of all, I’m excited to see what sort of dramatic talent Holland is really working with. Yes, there’s no questioning his status as a future A-Lister, but the fact remains that he’s been essentially pumping out popcorn content for the last four years, with his last “dramatic” roles coming in 2017. The only time I’ve seen Holland have to truly dig into his acting talents was in The Lost City of Z, and he absolutely crushed it, so I’m definitely pumped to see what the MCU staple has picked up and added to his repertoire in the years since.