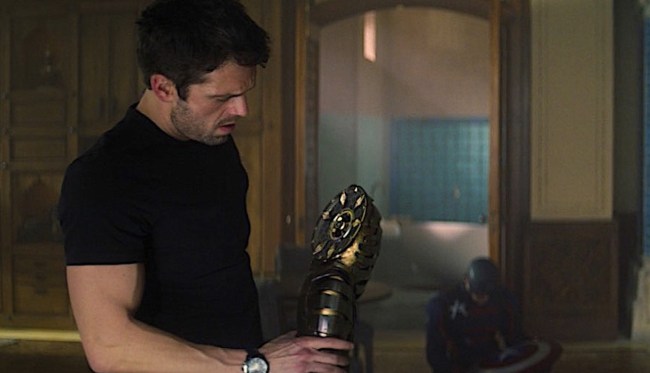 A tweet from Teen Wolf director Stephen Ford about the most recent episode of The Falcon and the Winter Soldier has sparked an online debate about the nature of the relationship between Bucky Barnes and the Dora Milaje.

Following last Friday’s episode of The Falcon and the Winter Soldier — where it’s revealed that the Wakandans, the ones who helped free Bucky from the Winter Soldier program and gave him his new Vibranium arm, built a failsafe into the technology that allows them to deactivate it whenever they need to — Ford tweeted his opinion on the scene, saying it undermines Bucky’s effort to reclaim authority over his life.

I'd like to note that it would be a totally different story if he knew about the fail-safe.

Ford’s take instantly went viral, with many disagreeing with his take:

yeah, if you wanna call the writers out for shitty ableist writing, that’s fine.

but projecting shame onto a fictional Black woman for neutralizing his weapon when HE broke their trust after helping him heal is transparent racism.

Batman is Superman's BEST FRIEND and has walked around carrying Kryptonite in his utility belt for YEARS.

You really think the Wakandans truly and fully trusted the man who murdered their king? Of course, there was a fail-safe.

That’s not to say that Ford’s mentions were filled entirely with critics, though, as there were also those who agreed with him:

The fact that they intentionally hid this information from Bucky, is why it's so underhanded and devious. And hurtful.

They never really trusted Bucky.
Interesting contrast between Walker and Battlestar and even between Bucky and Sam.

You've probably muted this but gotta add… while I agree it's sad they took his arm off, the Wakandans know Bucky is enhanced (that alone would warrant some type of precautionary measure). Speaking as an African, once we give you a name you're in the tribe -WW. 2 views can exist pic.twitter.com/rycxdNkVUo

RELATED: ‘The Falcon and the Winter Soldier’ Episode 5 Will Feature A Massive Marvel Cameo

Bucky’s ongoing struggle to regain autonomy over his life will surely be a recurring theme for the character for as long as he’s in the Marvel Cinematic Universe. While the Wakandans — and the rest of the world, frankly — don’t quite yet trust him, maybe his actions in the final two episodes of The Falcon and the Winter Soldier will go a long way in changing that. After all, no one wants to stop the deranged, murderous Captain America more than he does.

What did you think of the Wakandans’ decision to build a failsafe into Bucky’s arm? Let us know in the comment section!