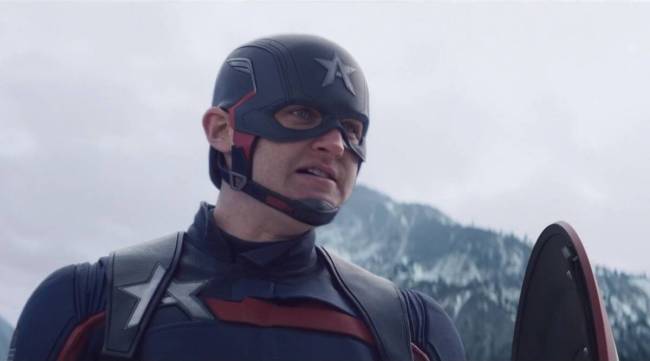 After weeks of beating around the bush, The Falcon and the Winter Soldier has committed to what kind of character Wyatt Russell’s unhinged John Walker, the new Captain America, will be.

Those hints at Walker’s fractured mental state were paid off in Episode 4 as the new Captain America did something he truly cannot come back from: killing a man in cold blood, in broad daylight, no less.

Following the death of his partner and best friend Lemar Hoskins, a.k.a. Battlestar, Walker snaps on one of the Flag Smashers — ironically, it’s the one who told Karli that he used to look up to Captain America — beating him to death with the iconic star-spangled shield in the middle of a town square as horrified civilians watch.

In fact, the horrific display from John Walker makes the new Captain America as much of a villain as anyone else in the series so far, at least as far as Twitter is concerned.

#JohnWalker after getting his ass kicked by the Dora Milaje pic.twitter.com/3MTuurTTIt

Just here to reiterate, #johnwalker is only so dislikable and engaging because Wyatt Russell plays him fucking amazingly#TheFalconAndTheWinterSoldier pic.twitter.com/gcmIs3JfTV

The parallel in the episode 4 of #TheFalconandtheWinterSoldier   are amazing. Malcom Spellman does an amazing job to show why #JohnWalker  is not a good Captain America. Steve Rogers had the chance the kill Tony Stark, but instead disarmed him; while John Walker chooses murder. pic.twitter.com/PX6FIzGSD2

CW // spoilers #TFATWS#JohnWalker #TheFalconAndTheWinterSoldier
–
–
–
–
John Walker when the video of him killing that man goes viralpic.twitter.com/lXBUoDgWNB

With both Sam and Bucky — the two people on the planet who loved Steve Rodgers and what his Captain America shield stood for the most — standing right there as Walker unleashed his madness, it’ll be interesting to see if next week’s episode picks up with the two attempting to subdue the newly murderous Cap. They’re literally *right there*, surely they can’t just… let him go, bloody shield and all?