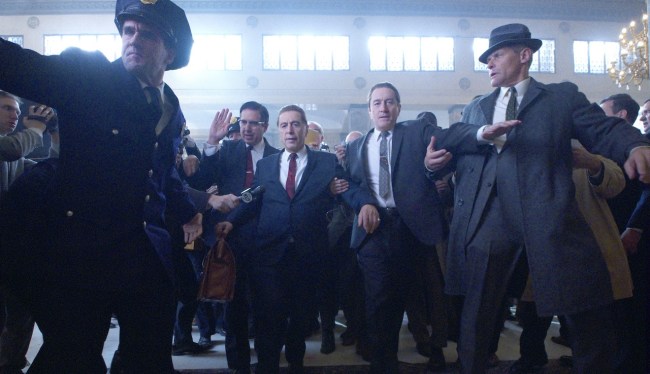 When the first trailer for The Irishman — Martin Scorsese’s next gangster epic movie — dropped, there were various corners of the internet that were loudly wondering if the iconic director had lost his fastball.

Considering the reuniting and de-aging of Robert De Niro, Joe Pesci, and Al Pacino to be nothing more than a gimmick, there were some critics and fans alike ready to dismiss The Irishman as a mere cash grab vanity project.

Luckily for all movie lovers, though, based on the initial reactions to the film — which just premiered at the New York Film Festival — The Irishman is more than a worthy addition to Scorsese’s already unrivaled cinematic cannon.

Based on the novel I Heard You Paint Houses by Charles Brand, The Irishman is set to tell the story of the notorious disappearance of Jimmy Hoffa and will mark the ninth feature film collaboration between De Niro and Scorsese.

I love THE IRISHMAN so much because it’s far more than another gangland notch on Scorsese’s belt. It’s an American epic concerned with profound moral decay and a lifetime’s festering regret. De Niro is sublime. Pacino is electric, with Pesci the calming foil. And it flies by!

THE IRISHMAN is not GOODFELLAS/CASINO part 3. Different pace different tone. It is, however, absolutely fucking fantastic and I am floored. All hail the King.

The Irishman is good. I laughed a lot.

Anyway THE IRISHMAN is like a movie genetically engineered to my interests so take my recommendation or leave it, but I think it’s a terrific picture – and an A+ example of a late period director saying, “oh, this is what you want?” and stabbing you in the fucking neck with it

THE IRISHMAN: An instant Martin Scorsese crime classic that’s everything you want to be, and more.

De Niro’s best work in ages, Pesci lights up the screen, and Al Pacino as Jimmy Hoffa screaming about the Kennedys is the peak of cinema!

THE IRISHMAN is Marty’s old man movie! it’s about how you gotta have fifty conversations to do anything and everybody’s got an ego and it’s mostly just people chatting to each other and getting grumpy. terrific!!

THE IRISHMAN is like a greatest hits album from a master of the medium. Yes, that’s a positive.

The artifice of de-aging is more feature than bug.

This is not a review! Those are embargoed.

The Irishman will hit theaters in the United States on Friday, November 1 before eventually being released on Netflix on Wednesday, November 27.