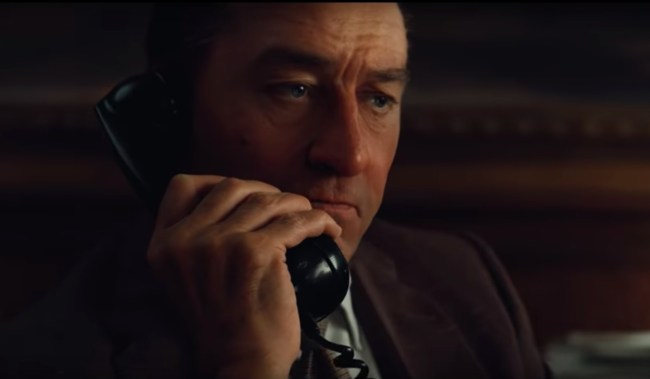 It’s been almost a decade since Martin Scorsese announced he’d decided to team up with Robert De Niro yet again for the film that would eventually be dubbed The Irishman, an adaptation of Charles Brandt’s 2003 book I Heard You Paint Houses.

The book’s title alludes to the first words that Jimmy Hoffa ever uttered to Frank Sheeran, the eponymous hitman the famed union boss recruited to do his dirty work. It seemed like a project that would be perfect for Scorsese to tackle given his track record and the subject matter, but sadly, he decided to take his sweet dam time making it.

In 2017, we finally got some good news when Netflix announced it had ponied up $120 million for a project that would bring Joe Pesci out of retirement and reunite De Niro and Al Pacino. Since then, we’ve been subject to a steady trickle of information—including a teaser trailer that dropped earlier this year.

This week, we were treated to a couple of photos that gave us our first real look at The Irishman but now Netflix has finally given the people what they truly want in the form of the first real trailer for the movie, which is slated to hit the platform and select theaters this fall.

De Niro, Pacino, and Pesci are all front and center in the trailer but the movie will also feature a cast including Harvey Keitel, Ray Romano, Anna Paquin, and Bobby Cannavale, which certainly isn’t a lineup to scoff at.

Part of the reason The Irishman has taken as long as it has to come out is the de-aging technology Scorsese opted to harness to make some of the actors look younger, and while plenty of people were skeptical about the technology, it looks like he nailed it.

Let’s hope the same can be said for the rest of the film.