Internet Reacts To Matt Damon And Ben Affleck’s Absurd Haircuts In Trailer For ‘The Last Duel’, Which They Also Wrote 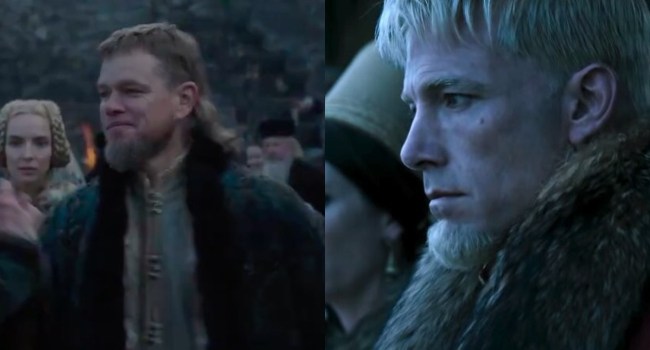 True story: I actually interviewed Matt Damon no more than 24 hours before this trailer for The Last Duel hit the internet. Had I been able to bear witness to its glory prior to our conversation, you bet your ass I would’ve mentioned it, particularly Damon’s medieval mullet. And how could I not, really? Ridley Scott has our dude out here looking like 14th century French Kid Rock.

In 14th-century France, knight Jean de Carrouges and his squire Jacques Le Gris are ordered to fight to the death after Carrouges accuses Le Gris of raping his wife.

Goofy and likely historical hair stylings aside, though, The Last Duel looks pretty excellent from where I’m sitting. Not only does it boast four A-listers — Damon, Adam Driver, Ben Affleck, and Jodie Comer — and not only is the legendary Ridley Scott directing, but Damon and Affleck helped write the script, marking the first time they’ve done so together since winning the Academy Award for Good Will Hunting.

Naturally, while movie fans found themselves understandably excited for The Last Duel, memes and jokes about the fashion choices were immediate and aplenty.

Gotta love Matt Damon and Ben Affleck runnin' around with WILD haircuts and facial hair meanwhile Adam Driver got to show up to set as. Man had the medieval swag already fully loaded pic.twitter.com/dadsO1RJOL

Love how Ridley makes Affleck and Damon unrecognizable with their hairstyles and facial hair and then just turns around to Driver and goes, “Eh, maybe just grow a go-tee and we’re good.”

Why is Matt Damon playing Joe Exotic in The Last Duel tho pic.twitter.com/ivVE2nHVob

tfw Dunkin’ Donuts won’t be invented for another 600 years pic.twitter.com/Xc79ngzb8U

Honestly, Ridley Scott should retire after The LAST DUEL. It would bookend his career perfectly, as his first feature was 1977's THE DUELLISTS. pic.twitter.com/3DJnGnLc51

Jodie Comer and Adam Driver fit like a glove in the world of THE LAST DUEL.

Matt Damon and Ben Affleck look like they’re hosting Saturday Night Live, and this is one of the pre-recorded skits.

RIDLEY SCOTT: I want you for a medieval movie called The Last Duel.

RIDLEY SCOTT: Your buddy Matt Damon is in it. Adam Driver. Jodie Comer.

Oh, and keep out for our full interview with Matt Damon, which will be dropping on Monday in both podcast and article form.