Breaking Down The Season Two Premiere Of ‘The Mandalorian’ 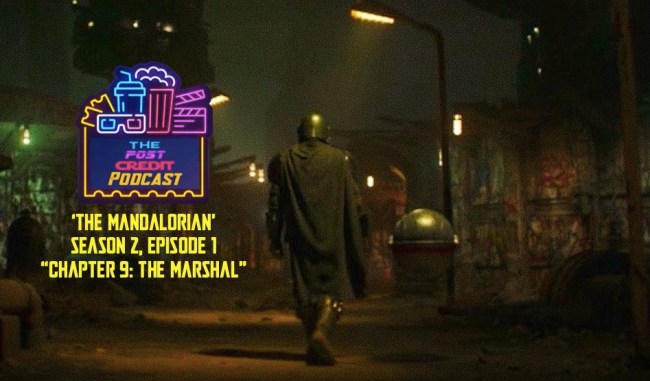 After an epic first season that saw the first-ever live-action Star Wars series score an Emmy nomination for Outstanding Drama Series, The Mandalorian returned to our television screens with its action-packed season two premiere on Friday, October 30.

The Post-Credit Podcast squad got up at the crack of dawn to check out the 52-minute premiere and dove into all things Mando, Baby Yoda, Timothy Olyphant’s new character, and yes, *spoiler warning*… the return of Boba Fett!

Tune into our full breakdown of Season 2, Episode 1 — “Chapter 9: The Marshal” — and make sure to subscribe to keep up with both our week-to-week The Mandalorian episode breakdowns and for all of the latest in pop culture news, such as the casting of Oscar Isaac as Moon Knight, or our interview with the Russo Brothers, the directors of a little movie called Avengers: Endgame.

RELATED- Here’s Why No One’s Said: “Hey Mando, Your Baby Looks An Awful Lot Like The Legendary Jedi Yoda”

First, a quick summary of the season two premiere plot before we dive into some of the finer details:

Picking up where season one left off, “The Marshal” finds Mando and Baby Yoda in search of other Mandalorians to assist on their quest in finding The Child’s home and/or people. Sent to Tattooine to find a Mandalorian, Din Djarin runs into Cobb Vanth, the marshal of Mos Pelgo played by Timothy Olyphant. In exchange for the armor he’s wearing (which is actually Boba Fett’s) Mando — teaming up with Tuskan Raiders — helps Cobb kill a massive sandworm that’s been terrorizing the townspeople. After successfully slaying the beast and retrieving the armor from Cobb, Mando rides off into the sunset as the *real* Boba Fett looks on from a distance.

Perhaps surprisingly, “Chapter 9: The Marshal” was more of an adventure-of-the-week style episode, similar to Chapters 4, 5, and 6 in season one. Instead of picking up with the main storyline — Baby Yoda, where he’s from, where he’s going, and who’s chasing him — and filling us in on what Moff Gideon has been up to since crashing his TIE Fighter in Chapter 8, this episode instead introduced us to Timothy Olyphant’s Cobb Vanth and had the pair team up on a mission that lays the groundwork for Boba Fett’s return.

While both Boba Fett and his armor appear in this episode, the two are notably separated. The last we saw of Fett in the main Star Wars continuity, he was being swallowed into the Sarlacc pit — which makes an appearance in this episode — in Return of the Jedi. Chapter 9 doesn’t let us know how he got separated from his iconic Mandalorian armor, but it does tell us that Cobb Vanth found it in the possession of Jawas.

What this tells me is that Boba Fett and his recent whereabouts will be explored at some point in season two, perhaps even over the course of an entire flashback episode. With Mando now in possession of his gear, it’s obvious the pair are set to cross paths at some point. The only question that remains now is whether that interaction occurs between friends or foes.