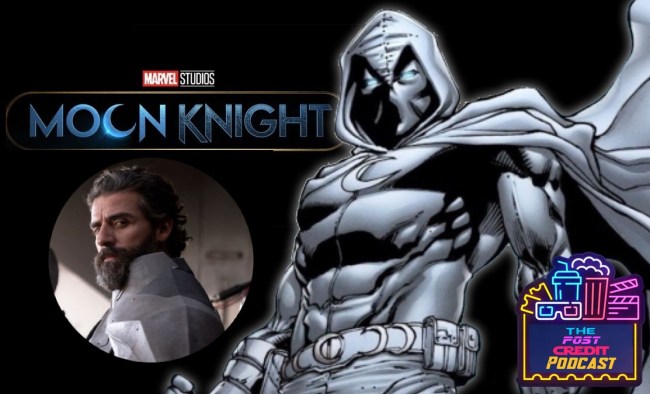 Check out our full breakdown of Oscar Isaac’s casting as Moon Knight, the news that Joker and Deathstroke will be appearing in The Snyder Cut, and recaps of The Mandalorian Chapter 7 and Chapter 8 on the latest episode of The Post-Credit Podcast.

After months of speculation regarding Disney+’s upcoming Moon Knight series — with names such as Shia LaBeouf, Oliver Jackson-Cohen, and Daveed Diggs attached to the role — news broke earlier this week that none other than Oscar Isaac had been cast to play the troubled yet heroic Marc Spector in the Marvel Cinematic Universe.

The first thing this casting tells me is that the future of the Marvel Cinematic Universe is going to exist on Disney+ just as much as it does in theaters. When casting a star like Isaac, you simply don’t relegate them to television, regardless of how swanky the project may be: Moon Knight and Isaac’s star power are going to feature a ton in the MCU’s future cinematic endeavors.

The investment into the Moon Knight character also suggests a commitment to the inherent weirdness of comic books. In one corner of the MCU, there will be multiversal adventures such as WandaVision, Doctor Strange in the Multiverse of Madness, and the still-untitled Spider-Man 3, and in the other, there will be an embrace of mystical ad supernatural elements coming in the form of Shang-Chi, Blade, Eternals, and Moon Knight.

What’s most exciting about the Moon Knight character as a whole is that he’s a drastic departure from the blue-chip, white-collar, A-list superheroes that populated the early phases of the MCU: substantially darker than the average Avenger, Moon Knight will bring a newfound sense of darkness that the franchise has long lacked.