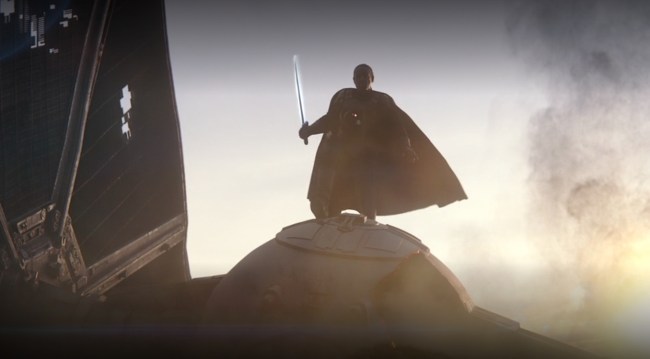 Despite the massive success of The Mandalorian, there was one Star Wars staple that was notably absent from the first season of the Disney+: lightsabers.

Given that the Jedi were also nonexistent in the first season, it makes sense that their weapon of choice was also nowhere to be found. However, in the final shot of the season finale, that all changed when Giancarlo Esposito’s Moff Gideon busted out the infamous Dark Saber from The Clone Wars.

“The prop guys are wondering about me because I was in a bit of a commotion and a bit of a struggle with someone else, which I’m hoping you will enjoy when you see it,” Esposito said during his spotlight panel. “Major, major, epic, epic lightsaber action happening on this show, and I should mention that I’m the only character in this first season who was able to be honored with having that lightsaber. So it feels wonderful.”

Naturally, they were quick to ask whether or not Moff Gideon would be going toe-to-toe with a lightsaber-wielding Din Djarin or Baby Yoda, a notion the actor quickly shut down.

“Well, no way. [Laughs],” the Mando star added. “It ain’t gonna happen, baby! Anything is possible, and you keep watching. Because although the baby has some incredible power, without having to wield the Darksaber, I think the baby is so curious about what this is. So you will be enthused and inspired when you see the scene I’m referring to in Season 2, which is to come in October. Keep watching.” [via ComicBook]

The highly-anticipated second season of The Mandalorian is set to his Disney+ in October.