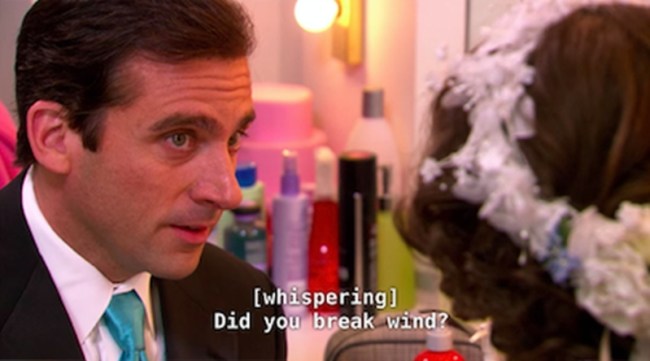 It’s been over seven years since the series finale of The Office aired and the mere fact that you’re reading this in the year 2020 is a testament to just how brilliant and hilarious and heartwarming the show was, is, and forever will be.

For perspective, Tiger King aired like three months ago and if I hear Joe Exotic ask for another presidential pardon, I’m going to lobby for capital punishment.

The Office episode we’re going to commiserate over today is Phyllis’ Wedding, the fifteenth episode of the third season, originally airing in February 2007.

You may remember Michael Scott relentlessly trying to upstage Phyllis during her wedding, basking in pushing her father’s wheelchair down the aisle and making an unwelcomed toast that ends up getting him booted from the wedding by the groom, Bob Vance.

But the real juice came from the scene where Michael enters Phyllis’ dressing room before the wedding and asks her if she “broke wind,” which is Boomer speak for farting.

Whittingham said, as transcribed by Mashable:

“Well, you know, Phyllis always was able to have such this earnest expression, you know, and whenever you had to be mean to her, or just like have some random line towards her she would look at you with these sweet eyes,” Kinsey said. “So I can, I can see Steve not being able to get through it. Being like, ‘That is really pungent,’ and she’s just like, ‘hmmm?'”

You can almost feel Carell trying not to lose it in the screengrabs below. 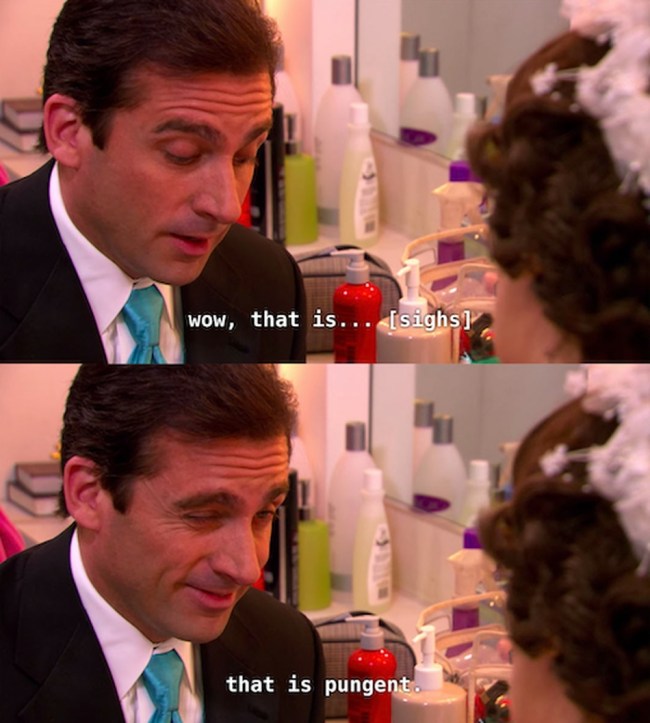 Phyllis claimed that particular scene was one of the fondest memories of not only her acting career, but her life in general.

“That scene was unbelievable. We had the best time. I don’t know how many times we had to stop to start over because there was one word in particular that we just could not get through,” Smith said. “And that was ‘pungent.'”

“Every time Steve said the word ‘pungent’ he would break out into this high-pitched cackle. And then I would start laughing. And then all of a sudden we heard the Video Village and the sound people outside the door, because we were in a small dressing room area with just the camera guy and a sound boom… So we could hear them cackling and laughing on the outside.”

TL;DR Farts are funny, even to one of the funniest characters on earth.