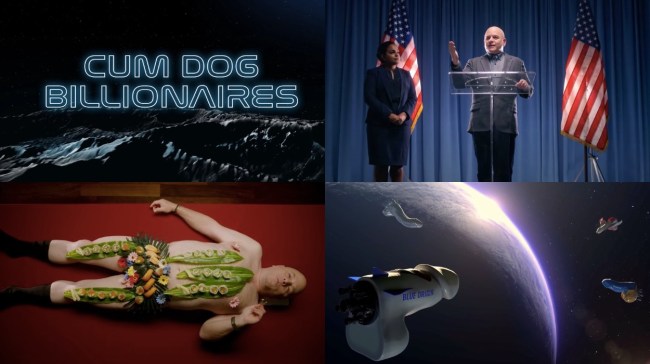 Jon Stewart announced his return to television in style on Tuesday night as the famed former Daily Show host dropped the first trailer for The Problem with Jon Stewart.

While not much is known about The Problem with Jon Stewart, the trailer shreds Jeff Bezos’ recent space venture, casting iconic Seinfeld actor Jason Alexander in the role of Bezos. In addition to Alexander, Adam Pally also popped up as SpaceX founder and CEO Elon Musk, while Tracy Morgan appeared as, and I quote, “Diverse friend who would never actually hang out with Jeff Bezos in real life.”

As mentioned above, not much is known about The Problem with Jon Stewart other than its format, as the series will reportedly feature hour-long episodes that will focus on a “single issue that is currently part of the national conversation and Jon Stewart’s advocacy work”. Each season will also be accompanied by a companion podcast.

The Opposition with Jordan Klepper‘s Chelsea Devantez is serving as head writer, while The Nightly Show with Larry Wilmore‘s Lorrie Baranek is on board as a producer. Stewart himself is also executive producing alongside his manager James Dixon.

The Problem with Jon Stewart will premiere on Apple TV+ in September. At this time, an exact release date has yet to be confirmed.