The Rock And Emily Blunt Teaming Up For ‘Ball and Chain’: Described As ‘Mr. And Mrs. Smith’ With Superpowers 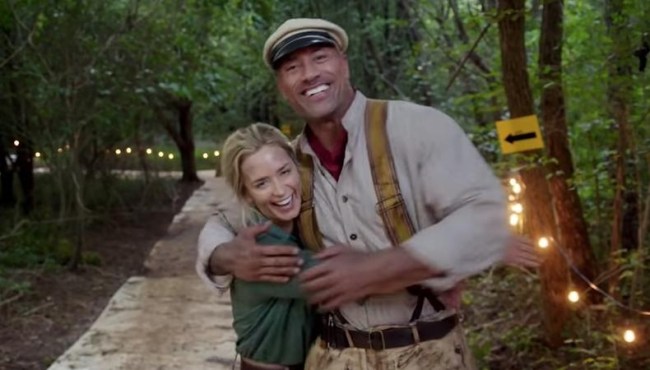 Before their first movie together even hits theaters, two of the world’s biggest movie stars are teaming up once again, as Deadline is reporting that Emily Blunt and Dwayne Johnson are currently set to star in a film called Ball and Chain, which has been described as Mr. and Mrs. Smith with superpowers.

The hot spec package tonight is Ball and Chain, with Dwayne Johnson and Emily Blunt attached to play a bickering couple who receive superpowers that only work if they can learn to put aside their differences and work together.

Here’s the description from the four-part comic book published in 1999: Edgar and Mallory Bulson have decided to throw in the towel. That was the plan anyway, until a mysterious meteor bathed the battling couple in extraterrestrial energies that gave them super-powers. Will their newfound abilities be enough to make their marriage work?

The script is by Emily V. Gordon (The Big Sick), and Kevin Misher is producing with Seven Bucks. Several studios are bidding, and it sounds like Netflix is emerging as a potential destination. [via Deadline]

The involvement of Emily Gordon’s script work certainly makes this project carry a little more weight than your typical superhero affair, as The Big Sick — which she wrote with her husband Kumail Nanjiani — was nominated for the Academy Award for Best Original Screenplay.

Both Johnson and Blunt have a busy couple of years ahead of them. Blunt will be starring in Jungle Cruise, A Quiet Place Part II (which was supposed to hit theaters in March), Wild Mountain Thyme, and now Ball and Chain. As for our man The Rock, in addition to Ball and Chain, he’s got Black Adam, Red Notice, and probably another Jumanji on the way.