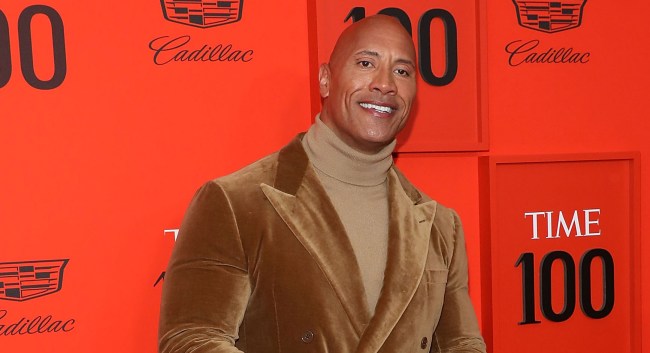 MTV announced last week that Dwayne “The Rock” Johnson will be receiving their annual Generation Icon Award at the 2019 MTV Movie & TV Awards.

“Johnson is an icon, on both film and TV, who has become one of the most beloved actors of our generation,” said Amy Doyle, general manager of MTV. “Throughout his career, Johnson has proven to be the ultimate badass — an action star with a flair for comedy, one of the greatest professional wrestlers of all time and a true family man. He continues to captivate his audience worldwide, and we are thrilled to celebrate him with the Generation Award.”

Johnson was recently named one of Time’s 100 Most Influential People for 2019 and has been involved in movies that have generated over $10 billion worldwide, so yeah, he’s done pretty well for himself.

We know this because, after being notified of the impending honor, The Rock posted a video of himself from 2001 when he was 29-years-old where he pretty much laid out those plans.

“At least my 29yr old goals & visions were as sharp as my silly eyebrows 😂 in this 2001 @MTV interview,” he wrote in the caption to the video. “This weekend I’ll have the privilege of being honored by MTV for the ICON GENERATION AWARD. Shaking my head as I’m watching this kid talk about his long term goals in Hollywood, WWE and beyond. In 2001 there was no “Hollywood blueprint” for a guy like me — a 6’5, 275lb half Samoan/ half Black pro wrestler with absurdly waxed eyebrows (Jesus Christ 🤦🏽‍♂️) with a southern accent.

“I was and still am, a walking contradiction who was willing to open my mind like a sponge to learn, put in the hard work, take the big risks and eventually I figured out that the most powerful thing I could ever be to Hollywood and the world – is myself. Regardless of the road you’re all on, be YOU and if a blueprint for your goals doesn’t exist – f**k it – create your own. And for the love of all things cool, dudes please don’t wax your eyebrows like I did.”

If you ever needed help with how to learn from failure and be laser-focused on your goals, The Rock is your man. Watch and be inspired.