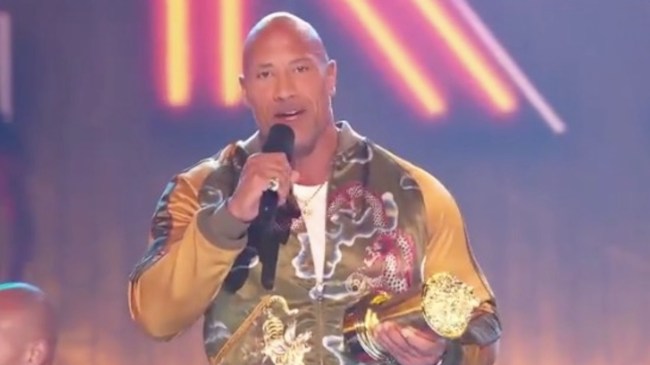 If you were born after the year 2000, Dwayne “The Rock” Johnson is likely one of the most famous celebrities you’ve ever heard of.

Whether it be his massive social media presence or his seemingly endless film and television output, The Rock has dominated the last 20 years to a point where his movie stardom has few peers.

Regularly near the top of Forbes highest-paid actors list, The Rock is undoubtedly not only one of the world’s most recognizable celebrities, but also one of its most influential.

And we haven’t even accounted for the millions who were born before the year 2000 that have been a fan of his ever since his wrestling days, when he was arguably — and unsurprisingly — the most popular wrestler in the history of the WWE.

Now, after a quarter century of box office and headline dominance, The Rock has officially been around long enough to be honored with MTV’s Generation Award.

Say what you will about the MTV Movie Awards, but the honor puts The Rock on a list with names such as Tom Cruise, Jim Carrey, Adam Sandler, Sandra Bullock, Reese Witherspoon, Johnny Depp, Jamie Foxx, Mark Wahlberg, Robert Downey Jr., and Will Smith.

In his acceptance speech, The Rock flashed all of his now-trademark enthusiasm and passion by thanking his friends, family, and fans for the success they’ve helped him achieve throughout the years before delving into the importance of remaining true to ourselves.

“I want to share a really quick lesson with you guys that I’ve learned over the years: the most powerful thing we can be is ourselves,” he begins.

“You know I was told at that time ‘well, you got to be a certain way.’ You got to drop some weight. You got to be somebody different. You got to stop working out. Stop doing the things that I love. You gotta stop calling yourself The Rock,” he continued.

And really, there is no one in the entertainment business today more deserving of the award.

The Rock, who first joined the WWF is 1996, has grown from professional wrestler, to gimmicky B-movie actor, to respected action star, to one of the most successful actors in the world, to someone whose name has been tossed around as a Presidential candidate.

Now that is how you define a generation.